By Editor on 18th June 2018 in Iraq Education and Training News, Security

As Iraqi Kurdish students prepared to take final exams, many found they could read all about the upcoming tests online and cheat if they wished. But where were the stolen exams coming from?

At the end of May, around 230,000 students in senior grades in Iraqi Kurdistan started taking final exams. The grades these young people in the semi-autonomous northern region get, will play a major role in their futures – so the tests are important.

The exams, held on May 27, start at 8.30 in the morning and as they do, the local authorities have been known to interrupt Internet access. This is supposedly so that students who already finished their exams and leave the examination rooms don’t get to circulate the questions or any advice to those students still working.

The students are handed the exam questions in an envelope. On the outside of the envelope are written the words: Very Confidential. Unfortunately, this year, that description has been disproven, as exam questions and answers were leaked on local social media accounts - again.

Screenshots showing the exam papers appeared two or so hours before the first exams were taken. Several teachers have complained about it.

“What an English exam!” one teacher, who could only be identified by his initials, BK, posted on Facebook. “The answers were posted two and a half hours before the exam was taken.”

BK posted screen shots from the account that had leaked the exam materials but, perhaps because this is an extremely controversial issue that has been causing problems in Iraqi Kurdistan for years and seen multiple arrests and dismissals, the original account that displayed the materials closed down.

Another teacher in the Juman neighbourhood in Erbil, Tekoshar Hussein, also protested online on June 6, talking about how exam questions were leaking. ”Unfortunately questions are being leaked every day and are being accessed easily by students,” the teacher said.

“The last people who get the exam questions are the teachers and the supervisors of the exam halls,” Hussein told NIQASH, adding that he had seen students showing the answers on their mobile phones to the exam supervisors, shortly before testing was to begin. The students told the supervisors that the answers had been posted, several hours before the exam.

NIQASH’s correspondent decided to try and find out more and befriended or liked several of the Facebook pages known to dispense the cheating exam answers. This meant staying awake almost all night. It’s common knowledge among the students that the pages will post the illicit information in the very early morning, just before the exams, so that the education authorities don’t get a chance to change anything.

On the night of June 5, questions for a senior school chemistry exam were published and on the night of June 6, the questions for a senior school English exam were published on the Facebook and Instagram pages. Both showed up on Facebook two or so hours before the exams were due to take place and before the Internet services were throttled. After they were posted, the leaked exams were then circulated by different students on social media.

Screenshots of the information that was posted were later compared to the government-issued exams after the tests had taken place: They were genuine, the questions were all identical.

NIQASH then contacted the various different sites that had posted the exams to help students cheat. Given the sensitivity of the material, it was difficult to get any answers from those managing the Facebook pages and Instagram accounts involved. However eventually one of the Facebook supervisors agreed to talk, after being promised anonymity.

“We have a relationship with a person who sends us the exam questions on Viber,” the page supervisor told NIQASH. “We pay them US$100, or we send credits to their phone. That’s how we got the questions.”

Asked more about who they were getting the questions from, the page supervisor only replied: “We are in Kurdistan and everything is possible.” No further details were given.

NIQASH also questioned a number of students, all on condition of anonymity. One said he had received questions from maths and English exams from a teacher, via Facebook Messenger. “The teacher did this to ensure that myself and some of my friends would get good grades in the exams,” he explained.

Another older student said he was part of a special Facebook group that had been set up specifically so that exam questions could be circulated among the members. He received the exam questions he needed at 6am on the morning of the exam. At first, he didn’t take them seriously, he says because he thought it was either a joke or a plan to deceive cheaters. But when he eventually took the test, he found that almost all of the questions in his maths exam were the same as the ones he had seen online earlier. 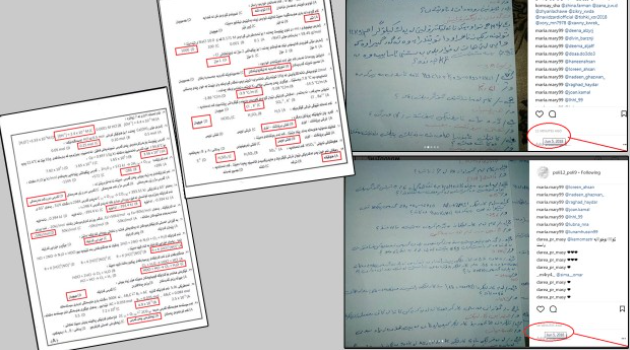 A further 18-year-old student told NIQASH she had heard about the leaked questions and she had heard many rumours. She says she also had the opportunity to look at them but she did not - because she was too busy studying. That may have been wise – there were certainly also old exam questions and materials that had nothing to do with this year’s tests online too.

Local education authorities’ rules say that an education department representative from each district gets the exam questions in a sealed, signed envelope about three or four hours before the testing begins. The representative then delivers the questions to examination halls and exam supervisors at 8.30am.

This means the questions must be being leaked between being given to the district representatives and their delivery to premises where exams will be held. But one might also speculate that the leaks are made at certain times to deflect suspicions from one group or cast them on another one.

This isn’t the first time that exam questions have been leaked in Iraq, or in Iraqi Kurdistan. In 1994, a whole grade had to repeat their exams because of this. It is common practice for the government to turn off Internet servers during exams. And two years ago 77 people were fired from their jobs in education in Iraqi Kurdistan – including senior managers and teachers – and some were even arrested. Exams were not retaken in that case.

The local education ministry is very sensitive about the subject.

Of course we know about the leaks, admits Shirko Hama Amin, an Iraqi Kurdish politician who sits on the education committee in the regional parliament. “But we haven’t spoken to the media about it as yet because we are worried about the students’ state of mind. But we have submitted all the evidence to the ministry of education and we will meet with the responsible ministers and with the exam supervisors about this topic,” Hama Amin told NIQASH.

At the moment, education officials are not confirming anything though. “No questions have leaked and we reject these accusations,” Karim Dizayee, the official supervising exams in Iraqi Kurdistan, told NIQASH. “There could be some irresponsible teacher who took photos of the exam questions and then posted them online, while the students were actually taking the tests,” he suggests. But that is all.

Once the politicians and the supervisors meet, if any wrong doing is confirmed, then it will be up to local prosecutors to decide how much further this goes.

Of course, his office will be investigating, says Dildash Fayez, a spokesperson for the public prosecutor’s office. “But even if we do find evidence of leaks, the exams will not be held again,” Fayez concludes. “It would be impossible. But the law will be brought to bear on those who were behind the leaks,” he promises.