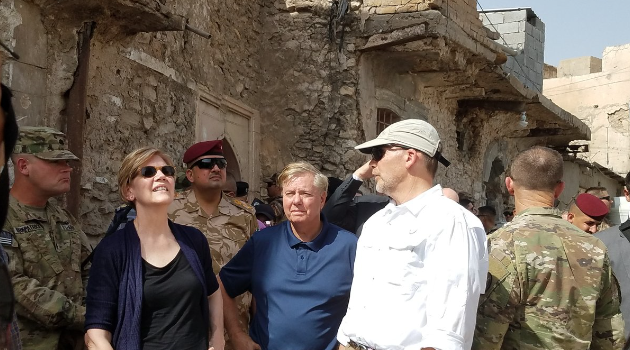 During their visit, Senators Graham and Warren visited Mosul to view the progress made in Iraq’s second-largest city, a year after its liberation from ISIS. The senators also learned about the continuing challenges in rebuilding Mosul.

The United States has provided more than $1.7 billion in humanitarian assistance to Iraq since 2014 and has contributed more than $190 million to support critical stabilization activities in areas liberated from ISIS control.

In Baghdad on July 4, Senators Graham and Warren celebrated the U.S. Independence Day with the Ambassador, his guests, embassy staff, and members of the American armed services.

In all of their meetings, the senators discussed the full range of bilateral and regional political, economic, and security issues, and reaffirmed the U.S. commitment to help Iraq combat the scourge of terrorism and to continue working with Iraq’s leaders and people to strengthen the U.S.-Iraq relationship under the Strategic Framework Agreement.