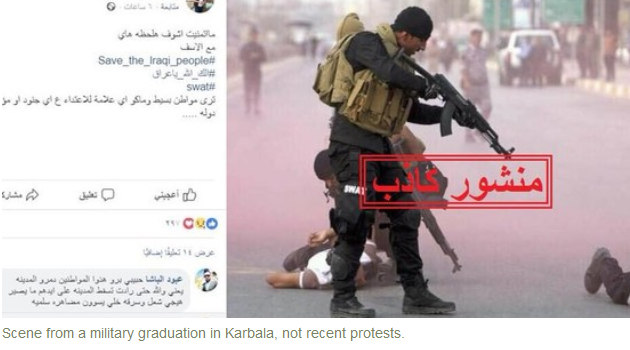 When it came to disinformation, shutting down the Internet to prevent protests in Iraq may have backfired. Iraqis get most of their information from social media and there was none, so false reports circulated wildly.

On June 14, the Iraqi government shut down the Internet in an effort to try and prevent the spread of anti-government protests. The demonstrations, which called for better state services, power and water, had spread from the southern city of Basra to nine other provinces, including Baghdad. And clearly the government wanted to prevent them from going any further.

For the past few years, these types of protests have broken out every summer. In stifling heat rising to 50 degrees Celsius, the lack of power to refrigerate foods or keep houses cool and the fact that water coming out of the taps is salty, is enough to drive Iraqis to protest. But these demonstrations spread further than previous years.

And one imagines that the Iraqi government was trying to prevent the spread of information about the protests, in order to contain them. They are able to block the Internet thanks to the fact that most of infrastructure used for relaying the Internet is government-owned.

However the Internet blockage seemed to only frustrate Iraqis further. Locals here rely heavily on social media to get their news; they tend not to trust local media, believing it to be partisan or funded by interested parties who push their own agenda. What friends and relatives post on Facebook has become a major and important source of information – and when the Internet is down they obviously cannot access this.

So locals found themselves watching TV to get more information about the protests or resorting to VPN – virtual private networks – to access the online world. Iraqis have become accustomed to using this kind of software when the government shuts down, or throttles the Internet here, but as digital privacy experts point out, these too can be  dangerous, especially with regard to privacy.

Clearly Iraqis right around the country were interested to know more about the protests. But pictures and videos were hard to come by, given the Internet shutdown. This led dozens of Facebook pages, specializing in Iraqi news and current affairs, to write up stories about the protests – but as they did, they also used older pictures and videos and many ended up publishing unsubstantiated rumours.

Iraqis who sympathized with the demonstrators didn’t just publish news reports on their pages, they also uploaded pictures and videos to Facebook – some of these were real and some were not. News organisations, like NIQASH, received these kinds of items via messages from people who appeared to be private citizens; however, due to the Internet shutdown, it was difficult to verify the content that was being sent and some of it was certainly not from the current demonstrations.

In fact, as Internet-rights activist and head of the Ansam Network, Haidar Hamzouz, says, the Internet blockade may well have had the opposite of the government’s intended effect. “Shutting down the Internet is a violation of the freedom of expression,” Hamzouz told NIQASH. “And the decision to do this was not the right one – it actually contributed to the spread of false news and it also became very difficult to inform anyone that  certain items were false news.”

It seems that in Iraq, as elsewhere in the world, false reports and emotion-generating half-truths spread far faster than the truth.

Even though the government owns the public broadcaster, Iraqi Media Network, and they have huge resources, they still have not been able to stop the spread of these false reports and rumours, Hamzouz says. “We need institutions that are capable of relaying the facts and combatting fake news, rather than those who just shut down the Internet,” he argues. “Combatting fake news and untrue reports requires a change in the communal culture, one that values verification and checks sources. Unfortunately this doesn’t yet exist in Iraq,” he notes.

One of the more dangerous pieces of false news involved reports that the security forces, who were clashing with the demonstrators in the south, were actually from elsewhere, and more specifically from Anbar and Mosul. The message was that Sunni Muslim soldiers – who mainly come from central and northern Iraq - were abusing Shiite Muslim protestors, who mainly live in southern Iraq. It was clearly a report aimed at fuelling sectarian conflict.

“It is so unfortunate that this news incited hatred against us,” says Ali al-Rubaie, a police captain based in Rustafa, Baghdad. “The members of the security forces who were deployed to the protests were actually residents from the same cities. Each province has its own police and counter-terrorism forces. It would be impossible to do that job with troops from outside of the provinces in which the protests occurred,” he argues.

Additionally when the protests first started, news that the demonstrators were clashing with Iraqi security forces spread fast. But given the internet blockade, it was difficult to find pictures from incidents. One picture that was shared many times shows an Iraqi soldier pointing his gun at an unarmed civilian lying on the ground. However the picture was actually taken during a military training exercise in 2014, organized for a military training graduation ceremony in Karbala.

Another dangerous piece of news had Talib Shaghati, the head of Iraq’s special forces troops, commenting on the clashes between the demonstrators and the security forces. “This is not our battle and we will not stain our hands with the blood of our sons and brothers for the sake of some corrupt officials,” Shaghati was alleged to have said in a  statement that was widely circulated on social media.

The same report said that Shaghati  had been asked to send his troops to the protests but he had refused, and that he had asked the government to listen to the demonstrators’ demands before it was too late. Thousands of Iraqis believed this report and some even said that there should be a military coup because it was clear that the protests had no impact on the government, and the military were on the protestors’ side.

The US was not coming to the rescue either: One report said that US president Donald Trump had said his government was keeping a close eye on the protests in Iraq. This was followed by video footage of two military divisions landing at Baghdad airport. None of this was true: The video was an old one.

Saudi Arabia was not coming to the rescue either. As the protest movement gained momentum, its critics were divided. Some said Iran was behind the protests because the neighbouring nation was going to stop supplying power to Iraq. Others said Saudi Arabia was at fault and was pushing people to demonstrate in order to cause chaos in Iraq.

One of the obviously false reports was started by a page on Facebook called Saudi News. It said that Saudi Arabia’s ruling monarch had ordered water lines and electricity transmission lines to be built urgently for the southern parts of Iraq. The report spread quickly throughout Iraqi social media despite its fanciful nature.