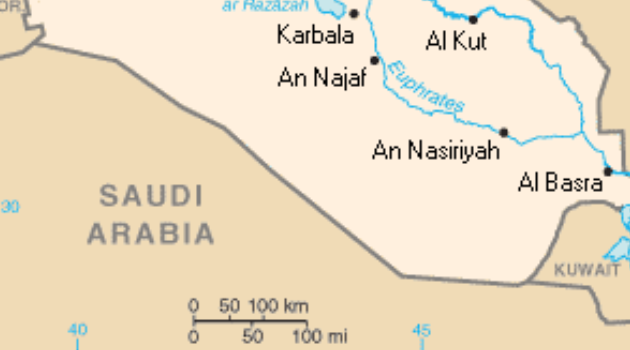 “Work is underway to re-open Arar for commercial purposes before the upcoming Haj season in a manner that benefits both Iraq and Saudi Arabia,” said Abdul Aziz al-Shammari, the Saudi ambassador to Iraq. In a televised interview announcing that the border crossing is to be permanently opened, he said that the Iraqi and Saudi sides have agreed on everything required for the reopening of the crossing for commercial purposes.

However, the issue of ownership of the border crossing remains a significant stumbling block: It is located within the borders of the Nukhayb district, approximately 300 kilometres southwest of Ramadi, which is in the Anbar province .

The Nukhayb district was created in 1960 and remained part of Anbar province’s Rutba district until 1978 when it was annexed to Karbala for 14 months. It was returned to the Anbar province in 1979 as a result of a crisis between the local population of the Nukhayb district and Ahmad Hassan al-Bakr, a former President of Iraq, after which it became a separate district in 2016, following a vote by Anbar provincial council members.

The Arar crossing point is located on the Iraqi-Saudi border, 97 kilometres southwest of the Nukhayb district, and since 2003 has officially only opened during the pilgrimage season so that Iraqi pilgrims can travel to the holy site of Mecca in Saudi Arabia. The border crossing has two routes; the first passes through the Karbala province and the second passes through the Anbar province.

The local government in the Anbar province highlights the success of its security and service operations every pilgrimage season, while at the same time stressing that this is done without financial allocations to the border crossing. It is also a way of confirming its ownership of the Nukhayb district and the Arar border crossing.

“Anbar province has administrated the Nukhayb sub district for 15 years. It allocated huge amounts of money to services and projects in the Nukhayb district in support of all sectors, as well as for logistical services to ensure the success of security plans and the travel of pilgrims through the Arar border crossing.”

In addition to its importance for commercial and tourism purposes, the Saudi-Iraqi border crossing is significant for various local and international political parties for political and security reasons. Observers and experts say that any developments related to the Nukhayb district tend to increase tensions and they stress that economic issues are not the only reasons.

“Controlling the Nukhayb district and the Arar border crossing from the Iraqi side has one specific reason,” retired military man, Mohammed Kartan explains. “Anbar wants to maintain the border crossing with its Sunni environment, specifically the Gulf, and Karbala and Najaf want to impose their control and influence to isolate Sunni elements from their support in the Gulf.

“Whoever controls the Jdaidet Arar border crossing and the Nukhayb district controls important transportation routes between Iraq and Syria that were created when the Islamic State group occupied most of the cities of the Anbar province. These routes were created in an attempt to find alternative ways to bring financial and logistical support to Syria without having to pass through extremist-occupied areas.”

The reopening of the border crossing could serve as an important outlet for Iraqi and Saudi trade, but it is a painful economic blow to Iranian trade, which heavily and directly depends on the Iraqi market.

Kareem al-Nouri, a leader of the popular crowd forces, told NIQASH that “if we assume good intentions on the part of Saudi Arabia, the decision to resume business permanently at the Arar border crossing is a good and useful decision which restores relations between Iraq and Saudi Arabia. However, we believe that the decision is of a political nature and its timing is not appropriate, especially with the US sanctions on Iran.”