Recently Cyprus has been recognized as the ‘super star’ of the citizenship by investment programs worldwide. The country has the most appealing second citizenship program being the only European country which grants the nationality in only 6 months without ever having to reside there. Cyprus has officially and by far, the fastest form of legally obtaining a European citizenship and passport which enables living, working and studying in any of the 28 countries members of the European Union.

Moreover, Cypriot passport holders can travel to major destinations without applying for visas. It allows instant visa free travel to over 170 countries including the UK, UAE, European Union countries, Canada, Australia among other major countries and often allows a stay from 30 up to 90 days at a time depending on each country.

Unlike many of the fast track citizenship programs which require a non-refundable financial contribution to a Government fund, Cyprus offers its investors the possibility of earning a good return while obtaining the citizenship. The Cypriot citizenship law requires a temporary investment of EUR 2 million in a Real Estate investment in Cyprus which is required to be held for 3 years and thereafter can be sold while maintaining a property worth 500,000 EUROS. It is certain that not everyone can afford it, but for those who can, this is potentially on of the best investment they would have made in their lifetimes, leaving their families a great legacy.

The program has become so popular among HNWI citizenship applicants from all over the world especially Asia, Middle East and Russia, that the Cypriot Government has recently announced a cap of only 700 applications per annum to maintain its high standards. According to Cypriot news agencies, the Government of Cyprus has released reports of issuing passports for over 3,300 families bringing into the economy approximately USD 4.5 Billion. This has helped turning the Cypriot economy around becoming one of the fastest growing GDP’s in Europe. At the moment, Cyprus GDP levels are considerably higher than those of the Eurozone and the European Union according to a report released by the international firm KPMG.

The Cypriot citizenship by investment program is one of the many incentives established by the Government to attract foreign direct investment to the country. The first amendments to the citizenship law were introduced back in 2013. Since its inception, the program has undergone various improvements to make it more accessible and attractive for investors. In September 2016, the Government of Cyprus introduced an amendment which reduced the minimum investment amount to EUR 2 million (from EUR 2.5 million) and the option to add the parents of the main applicant for an additional EUR 500,000 plus VAT investment in a property in Cyprus.

According to official statistics from the Department of Land and Surveys, in 2017 Cyprus has recorded a 24% increase in real estate sales contracts, 30% of which accounted to non-nationals. Not surprisingly 31% of the real estate transactions in 2017 were properties valued at around 2 million EUROS, which indicates that a high number of investors are purchasing real estate as a mean to obtain the Cypriot citizenship.

The contribution of real estate to Cyprus’ GVA amounted to EUR 2,4 Billion in 2017. Construction activities from 2013 onwards indicate to have broken through the slowdown of the financial crisis, which has been clearly left way behind, and entered into an expansion period which until 2019 is set stretch to pre-2013 levels where Cyprus recorded all-time highs in real estate transactions.

From a taxation point of view Cypriot passports holders actually benefit. Non-tax residents are not liable for income tax generated outside the country. More importantly Cyprus does not impose inheritance tax on property, which gives the ability to pass it down to future generations without incurring costs.

So how does all this benefit investors? Cyprus has become one the of the most attractive real estate investments in Europe. This injection of billions of Euros in luxury real estate and infrastructure is turning the Cypriot landscape around. Limassol will soon have ‘One’ the tallest residential tower in Europe, Ayia Napa is undergoing the non-stop 24/7 construction of the most luxurious marina in the region with high end international restaurants and villas worth EUR 5 million with their own private berths. The whole country is having a radical facelift with modern contemporary architecture of glass and refined design are taking over. In the next 3 years, when allowed to re-sale, investors will be able to appreciate the growth of their investments as part of this radical transformation.

One can understand the excitement of savvy businessmen when considering buying property in Cyprus, after all they know that they are purchasing luxury real estate in a newly booming property market.

It is clear that Cyprus has not only become the ‘super star’ of citizenship programs but also earned a prime position amongst the most profitable real estate investments worldwide. Demand translates into growth which then translates into high profits. Whether applying for citizenship or not, Cyprus seems to be the place to invest in. 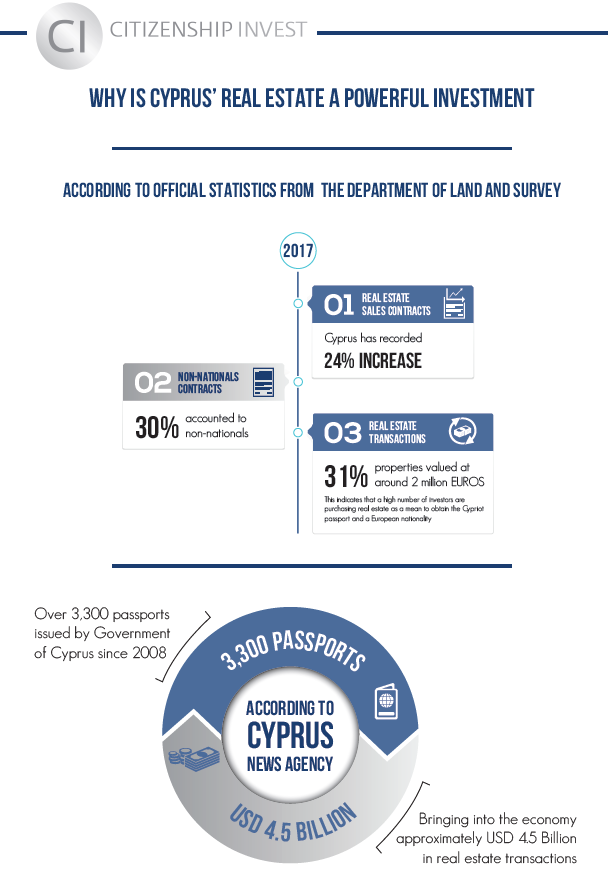 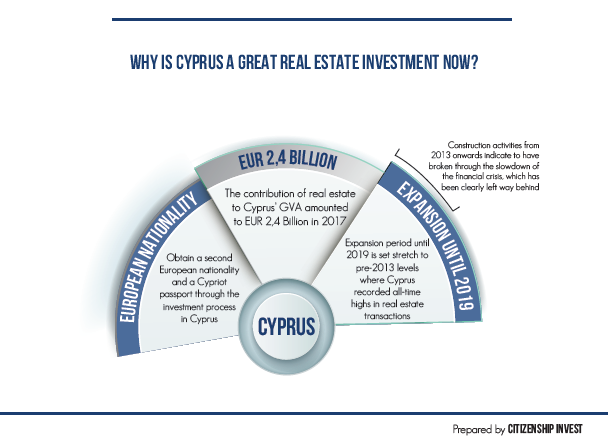