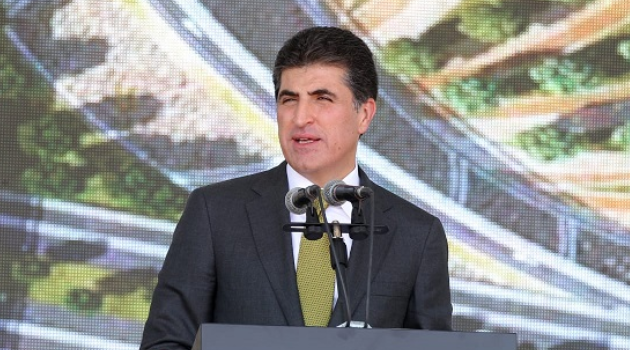 By Editor on 2nd October 2018 in Iraq Transportation News

Prime Minister Nechirvan Barzani attended the ground-breaking ceremony of the 150-meter ring road project of the city of Erbil.

In a speech during the ceremony, Prime Minister Barzani said:

“The 150-metre road project is one of many projects which were prepared for implementation by the Kurdistan Regional Government. If it had not been for hardships faced since 2014, the KRG would have completed many similar projects in all major communities of the Kurdistan Region.”

Below is the text of Prime Minister Barzani’s speech:

As we participate in this ground-breaking ceremony to open the Erbil City 150-meter ring road, I am delighted to meet with you again. This project is good not only for Erbil, it will facilitate road transport throughout the Kurdistan Region by reducing congestion on routes within and through the Erbil City area.

As the capital city in the center of the Kurdistan Region, Erbil is situated on many routes that connect international border entry points with the rest of Iraq, and also connects neighbouring countries with each other. Important trade routes pass between Syria, Turkey, and Iran through the Kurdistan Region.

The first stage of the implementation of this 150-meter road project, includes the part which will run from Koya road to Bahirka road, 14 kilometres long and estimated to cost 131 million US dollars.

The Hemin Group will finance and implement this project with deferred payment. It will be a high-speed road with a service road alongside it. There will be three bridges and three underpasses with related high-standard equipment.

The Hemin Group will also be implementing a dual carriageway14 kilometres long between Erbil City and Gopal.
Yesterday also we participated in the ground-breaking ceremony of a project that connects Erbil and Duhok with a dual-carriageway.

The 150-metre road project is one of many projects which were prepared for implementation by the Kurdistan Regional Government. If it had not been for hardships faced since 2014, the KRG would have completed many similar projects in all major communities of the Kurdistan Region.

Adversaries of the Kurdistan Region were unable to accept the progress being enjoyed by the people of the Region, did not, and do not, want to see a well-built and lively region filled with peace and security. They did their best to obstruct the Kurdistan Region’s wheel of success.

Cutting the Kurdistan Region’s budget and ISIS threatening the Region with terrorism did not randomly occur. They were considered and planned. The war against ISIS brought nearly two million displaced persons. But the most damaging factor that adversely affected the people of the Kurdistan Region was the fall in global oil prices.

If it were not for the perseverance and courage of the Peshmerga, security personnel, understanding and support of the people of our Region, including our government employees, no government anywhere in the world would have withstood such crises during the past five years! What government has withstood war in the midst of such severe political and financial challenges, and all the domestic issues that have been crippling the Kurdistan Region and its government?

Now, strengthened by the support of the Kurdistan people and by the determination, loyalty, and selflessness of the Peshmerga, and the sacrifice and endurance of all the hardships the government employees have gone through during past few years, the bad days are almost over. As part of our long-term mission, we as the Kurdistan Regional Government will continue to act on our original main responsibility, which is to provide public services. To further develop our country, we continue to implement development projects that we planned.

Despite all shortcomings, constructive criticism, and even destructive criticism that have been and will be directed at the KRG due to political competition, the KRG has always been providing the best possible services.
If any citizen from the Kurdistan Region or any foreign observer looks back at the past 15 years, she or he will realize the truth that in spite of all challenges, the KRG has made remarkable progress in all sectors.
It is correct that the expectations of the KRG and the people of Kurdistan were higher than what has been achieved. We cannot overlook, however, the fact that over 15 years of the KRG’s leadership the Kurdistan Region has achieved a total makeover in almost all aspects.

Hundreds of completed projects vouch for the efforts of the KRG having contributed to the infrastructure of the country, such as roads and bridges, water and sewer systems, hospitals and schools, spatial development of cities and towns, and reviving livelihoods of many thousands of citizens of Kurdistan in many hundreds of communities, attracting foreign investment and opening of many malls, hotels, restaurants and cafes, building small and large factories, and dozens of other projects.

In ceremonies like this the intention is not to brag about achievements but to reaffirm that the first and foremost responsibility of the KRG is to serve its people, confirm such responsibility is taken seriously at every opportunity, and that the KRG seeks to realize the goals of stability, progress, and a high standard of living for all citizens.

As we participate in this groundbreaking ceremony, we reiterate the objective of the KRG that along with every step toward a stable economy, the government will take similar steps to implement plans to develop all sectors in all parts of the Kurdistan Region.

We look forward to the next phase to serve the people, promote stability, and build a durable economy with a better living standard for our people. We are sure that the worst days are over, and tomorrow will be better than today.

In the end, I would like to especially applaud Mr. Khalid Khoshnaw, the head of the Hemin Group and his colleagues for all the good work they have produced in various parts of the Kurdistan Region on long-term relaxed loans. This reflects his unshakable trust in the KRG.

He is the ultimate example of a loyal patriot and citizen. I wish to see more people like him and I wish him all success. We truly need people like him in the Kurdistan Region who always look to serve their nation to make progress in every field and build their country.

By that, they will forever leave their positive footprint on the future of Kurdistan.

I look forward to meet you all again in another location of the Kurdistan Region and at another project.