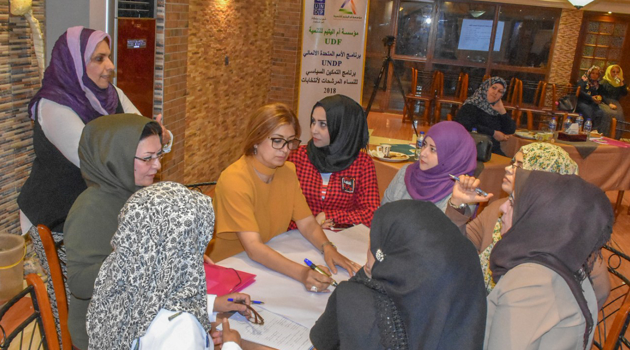 In order to promote the equal opportunities for women to play their role as an active agent of society and due to the importance of political empowerment, participation and mobilization of women in the Democratic Government in Iraq, the United Nations Development Programme (UNDP), as part of its governance programme to strengthen electoral processes in Iraq, launched an initiative to empower and develop capacities of 200 women candidates, from various political coalitions, who took part in the recent parliamentary elections in Iraq.

Political and electoral processes should be inclusive of women and acknowledge a special circumstances and needs. Women’s participation and representation is supported by many international frameworks, including CEDAW, the Beijing Declaration and Platform for Action, UNSCR 1325, UN Resolution on Women and Political Participation, and the 2030 Agenda. These frameworks acknowledge that women's participation is fundamental to democracy and essential to the achievement of sustainable development and peace.

This initiative was aimed at strengthening women candidates capacities with a team of experts on electoral laws and regulations, leadership skills, communication using mass and social media (interviews and public speech), formulation of political messages, political campaigns and importance of gender equality. This training carried out in collaboration with Um-Alyateem for Development Foundation UDF, a local NGO, consisted of eight workshops targeting 25 women candidates each. An electronic platform for candidates who engaged in the program was created to exchange experiences and address questions through Facebook and viber. All candidates’ interviews were collected and disseminated by a YouTube channel since April 15th.

The Country Director of UNDP in Iraq, Mr. Gerardo Noto said: “Gender equality and women’s political participation are at the core of the 2030 Agenda for Sustainable Development. Indeed, Sustainable Development Goal (SDG) 5 and its target 5.5 aim to ensure ‘women’s full and effective participation and equal opportunities for leadership at all levels of decision-making in political, economic and public life,’ and are crucial to establish inclusive institutions at all levels, as called by SDG 16”.

The recent Report of the Secretary-General on Progress towards the Sustainable Development Goals (E/2017/66) unveiled that “globally, women’s participation in single or lower houses of national parliaments reached 23.4 per cent in 2017, just 10 percentage points higher than in 2000. Such slow progress suggests that stronger political commitment and more ambitious measures are needed to boost women’s political participation and empowerment.” In the Arab States, the average percentage of women’s participation in national parliaments is only 18%. This constitutes the second lowest performing region for female representation.

UNDP Gender Specialist, Ms. Sundus Abbas stated “UNDP not only believes in the importance of supporting the participation of women in the political process but also it is convinced of the key roles of women on political levels and the added value that women bring to policies, therefore UNDP promote gender team in IHEC with tools and methods to insure  gender perspective in electoral process”.

Dr. Amira AlBaldawi, the director of UDF and a member of the COR from 2005-2010, confirmed “Although  the Iraqi Constitution, in Article (49 - IV) sets the quota for women in the CoR at not less than 25%, and although the number exceeded 84, yet the impact was very limited and did not meet people’s expectations. In addition to the above, most electoral lists heads stated that they will present high percentage of  new candidates, which requires more support to enhance and empower women capacities, to allow them to  participate effectively in the election. This is why we think such initiative is critical to strengthen women participation in Iraq”.

Dr. Nada Shaker, professor at Baghdad University and one of the woman MPs, stated “ I participated in the polls in order to serve the people in need via legislation of Codes that deal with investment and basic services, UNDP initiative was  very useful but it should be conducted months before the election so that women candidates can make full use of it”. She said  “Since I have the skills and tools, I am looking forward to create a parliamentary bloc that is able to make change”. She added “I hope that Women MPs can form a bloc that play a key role in the parliament”.