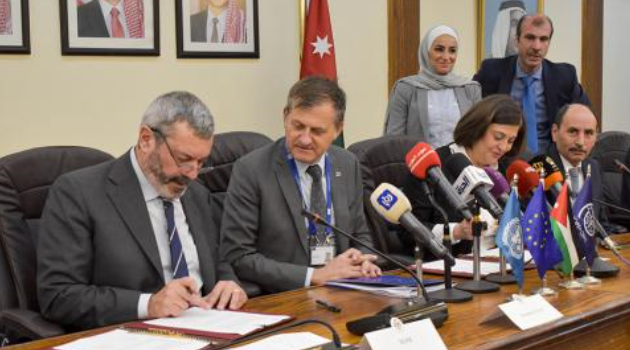 By Editor on 12th December 2018 in Iraq Transportation News, Security

In partnership with the Government of Jordan, the International Organization for Migration (IOM) and the United Nations Office on Drugs and Crime (UNODC) signed an official partnership yesterday (10/12) to upgrade the al-Karamah border crossing point between Iraq and Jordan.

The project, funded by the European Union Instrument Contributing to Stability and Peace (EU IcSP), also contributes to the stability and economic recovery in the region.

“Iraq has always been a key economic partner for Jordan and a significant market for Jordanian exports. The closure of al-Karamah border point over the past years has had a significant negative impact on Jordan’s manufacturing sector and on the Jordanian economy in general. The government is working tirelessly to restore the economic ties with this important country for the benefit of the two sides, and we hope that the rehabilitation of al-Karamah will constitute another building block in this effort,” said Dr Maria Kawar, Minister of Planning and International Cooperation.

Al-Karamah is the only official border crossing point between Iraq and Jordan. Closed in the summer of 2015, it reopened in August 2017 raising the prospect of an improved economy among traders and consumers. Long-lasting crises in Syria and Iraq forced the closure of the land borders with both neighbors, namely the direct route between the ports of Aqaba, on the Red Sea, and Basra, on the Arabian Gulf.

Before the closure of the borders, Iraq was one of the main trade partners of Jordan. In 2013, 178,573 commercial trucks used al-Karamah to enter Iraq from Jordan, and 173,788 entered Jordan from Iraq. Border closures considerably increased the price of imports and exports.

"Border crossing points facilitate trade and exchange between people and communities. This EU-funded project will share the EU approach on integrated border management and adapt it to the situation at the Jordan/Iraq border with a view to facilitate bilateral trade and the movement of people,” said Mr Andrea Matteo Fontana, European Union Ambassador to Jordan.

The project will allow for the construction of a joint building for all departments operating at al-Karamah that will ease procedures and shorten the waiting time for passengers, allowing authorities to process a higher number of passengers per day.

The security of the passengers and the Kingdom will continue to be at the centre of the operation, with enhanced trainings on document forgery detection and other techniques related to border management.

Communities at both sides of the border will benefit from the improved border crossing point.

“I am from al-Anbar and I study pharmacy in Amman. I used to pay around 200 dollars to fly to Baghdad, and then I had to take a bus to al-Anbar from the capital. With the border post re-opened, I save money and time, and I can come home more often,” one young student told IOM staff.

“Communities in remote border regions need additional support to take advantage of the opportunities and overcome the challenges associated to a border context. The project will contribute to revitalize the economy of Mafraq and al-Anbar regions that used to rely on the livelihoods directly or indirectly created by the movements through the border post, before its closure,” said Enrico Ponziani, Chief of Mission of IOM Jordan.

The project will also improve cargo control procedures to secure and facilitate trade with the extension of the UNODC/World Customs Organization Container Control Programme at the al-Karamah border crossing point, and the establishment of a Border Control Unit.

“UNODC’s contribution to this project is two-pronged. Firstly, it aims at further securing the Al Karamah-Turaibil border crossing by strengthening the capacity of Jordanian and Iraqi law enforcement agencies to prevent trafficking of illicit goods. Secondly, it serves to facilitate trade across the border by strengthening cooperation with the private sector and streamlining cargo clearance and control processes”, said Ms. Cristina Albertin, Regional Representative of UNODC.