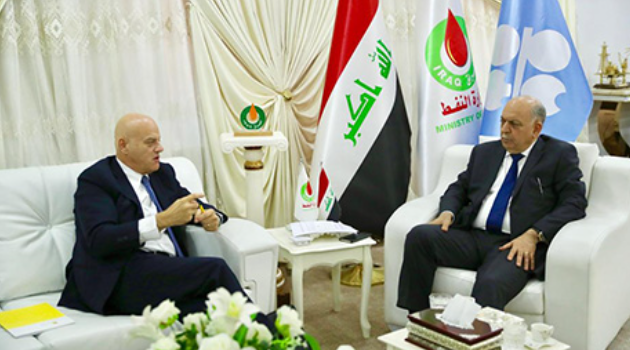 Eni's CEO outlined the Company's current activities in the country in light of the recent achievements of the Zubair field development. Mr. Al-Ghadhban and Mr. Descalzi also discussed future opportunities and development investments that will further strengthen Eni’s relationship with the country.

At Zubair oil production has grown by over 100% since 2015 and a new 380 MW plant that will generate power for domestic consumption is in the final stages of construction.

Mr. Al-Ghadhban and Mr. Descalzi also discussed future opportunities and development investments that will further strengthen Eni’s relationship with the country. The Deputy Prime Minister for Energy Affair and Eni’s CEO also discussed the progress of social projects that are currently underway in the Basra Governorate in the areas of healthcare, education, access to energy and clean drinking water.

Finally, Eni’s CEO also highlighted potential synergies related to energy projects in Iraq, a strategic lever for the Country in maximizing its use of national natural resources.

Eni is one of the largest international upstream oil & gas players in the country, where it currently operates 475,000 barrels of oil equivalent per day (35,000 boed Eni equity).