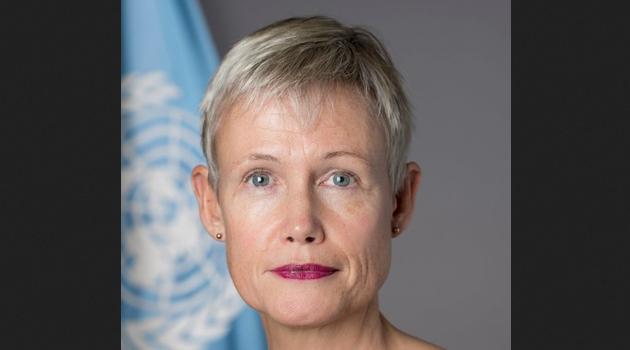 International Women’s Day was celebrated today at an event organized by the Directorate for the Empowerment of Iraqi Women at the Council of Ministers.

The event, which was supported by UN Women and the International Medical Corps, was attended by senior Iraqi government officials, including the two Deputy Speakers of the Council of Representatives, human rights activists, civil society representatives, the international community and many others.

Deputy Special Representative of the United Nations Secretary-General (DSRSG) Alice Walpole (pictured) addressed the meeting, along with Dr. Mahdi Al-Allaq, Secretary-General of the Council of Ministers, who represented the Prime Minister; Dr. Thikra Alwash, Mayor of Baghdad and Chair of the Standing Committee on the Advancement of Women; UN Women’s Representative, Ms. Dina Zorba and UNFPA Representative, Dr. Oluremi Sogunro; as well as the Director-General of the Directorate for the Empowerment of Iraqi Women, Dr. Ibtisam Aziz.

In her remarks, DSRSG Walpole welcomed the upcoming discussions in Parliament on updating the Anti-Domestic Violence Law. “We need to acknowledge that domestic violence diminishes and shames all of society; it is a threat not just to women but to society itself,” she emphasised.

Reflecting on the challenges facing displaced women across Iraq, DSRSG Walpole noted that “They continue to suffer the brutal consequences of the recent conflict”.

“Female-headed households should be prioritised in accessing public services,” she said, and called on the Ministries of Defence and Interior, and the National Operations Command, to “to ensure that secure clearance mechanisms are coordinated among security actors to minimize re-screening of individuals already screened; and to consider removing security clearance requirements for civilians who have not been charged with a criminal or terrorism-related offence, so they do not face obstacles in accessing public services, including civil registries and courts”.

DSRSG Walpole also noted the high unemployment rate amongst young women, which is double that of men. She called on the government to “offer small business grants to female entrepreneurs to help them into the business arena, in particular to women returnees in the liberated areas, and those heading households”.

“Advancing women’s economic empowerment in this way will contribute to the government’s efforts to achieve national stability,” she noted