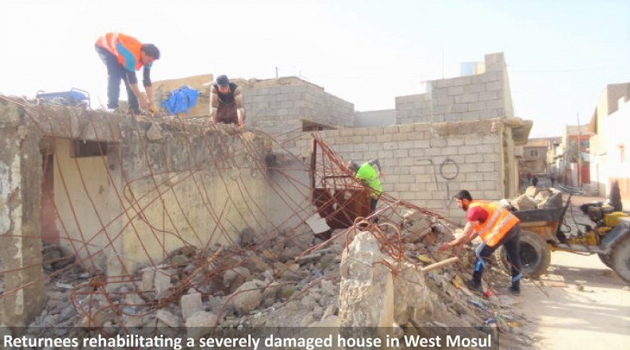 By Editor on 4th April 2019 in Construction & Engineering In Iraq

The United Nations Human Settlements Programme (UN-Habitat) has welcomed an additional contribution of USD 5.4 million from the Government of Japan to support reconstruction and peacebuilding in Iraq through the rehabilitation of war-damaged houses and construction of low-cost housing units in key liberated cities.

More than one year from the declaration of the military victory over so-called ISIL in 2017, more than 1.7 million people are still displaced in Iraq. The rehabilitation of severely damaged structures and rebuilding of fully destroyed houses are extremely costly and require robust engineering expertise. IDPs with their severely damaged or fully destroyed homes are still in dire need of support.

Through the additional funding UN-Habitat will be able to continue its community-based interventions and the rehabilitation of “severely damaged” houses and the construction of low-cost housing units to accommodate vulnerable returnees whose houses are “destroyed.”

Returnees and members of affected communities will be trained on skills required for the works and recruited under the project to support rebuilding their livelihoods. Approximately 2,500 returnees are expected to benefit from this project, and priorities will be given to vulnerable households including female-headed households, those with elderly, infants and children under age 6, or physically impaired.

His Excellency Mr. Naofumi Hashimoto, Ambassador of Japan to the Republic of Iraq said:

“Japan has recently decided a new assistance package for Iraq amounting to US$ 63 million, including this project as a contribution to the housing sector. With this package, the total amount of Japan’s assistance to the people affected by the crisis reaches US$ 500 million.”

UN-Habitat is grateful to the people and the Government of Japan for their continuous generous support which allows integration of the New Urban Agenda and physical interventions for post-conflict reconstruction and peacebuilding.

The development of sites for low-cost housing units designed to accommodate vulnerable displaced people who lost their homes is one of the pillars of the “Housing Reconstruction Strategy” recently developed by the Government of Iraq and UN-Habitat to enhance and accelerate housing reconstruction and development in conflict-affected areas.

With a contribution of approximately $50 million since 2015, the Government of Japan has been a vital partner to UN-Habitat’s Iraq Programme.