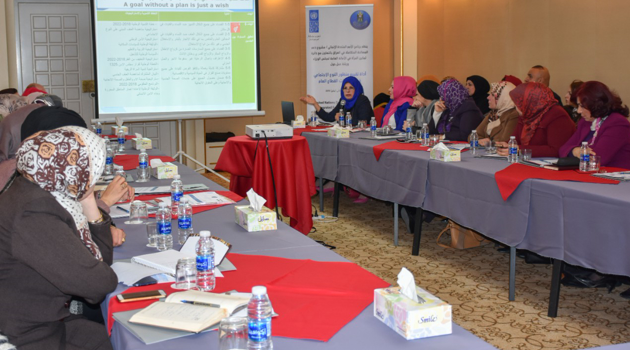 By Editor on 9th April 2019 in Politics, Security

Gender mainstreaming is the cornerstone of development and peacebuilding, it occupied a very important part in SDGs and Agenda 2030. The United Nations Development Programme (UNDP) had developed an assessment tool to track gender equality in the public institutions, in order to create a baseline and to prioritize the work for the coming years.

This tool is divided into six parts related to tracking progress on gender equality goals: Framework, capacities, enabling environment, partnership and engagement, laws, policies and programmes and results and impact.

A workshop was held on Public Sector Gender Equality Seal in Dec. 2018, in addition to two consultations meetings with the Women Empowerment Directorate in the General Secretariat for the Council of Ministries and the Ministry of Planning (MoP), to choose the public institutions which will be assessed.

As a result, the Women Empowerment Directorate was chosen as an implementer for the Gender Equality Tool, due to its mandate in empowering women in Iraq, and for being the umbrella for gender units and departments all over the ministries, which can be used to implement the tool.

Deputy Minister of Planning, Dr. Maher Johan, stressed the importance to adopt the Sustainable Development Goals and the 2030 agenda, particularly SDG 5 which states on achieving gender equality and empowering women, and SDG 16 which states on promoting peaceful and inclusive societies for sustainable development, and also agreed on selecting MoP as a sample.

UNDP in cooperation with Women Empowerment Directorate and MoP conducted a workshop on 7th Jan. 2019 in Baghdad, attended by 39 representatives from the gender units of line ministries. The workshop presented the Tool of Gender Equality Seal in order to enhance the capacities of Women Empowerment Department to implement the tool in Public Sector, and discussed the important of Gender Statistics as well as it presented the gender mainstreaming into the national development plans and strategies.

It was mentioned by the Deputy Country Director Mr. Vakhtang Svanidze that:

“UNDP chose Iraq to be part in this pilot as we believe that the Government of Iraq had taken critical steps towards gender equality and women empowerment in different levels, in additional to its efforts to implement the sustainable development goals and leaving no one behind. This pilot is an opportunity for Iraq to share its work globally, and advance gender participation within public-sector institutions”.

This workshop was part of the efforts to integrate SDG 5 into policies and plans, UNDP cooperation with gender units on the Gender Equality Seal Tool which has been developed by UNDP to measure Gender Mainstreaming within institutions will create solid working places.

Gender mainstreaming is considered as one of the main pillars of the mandate of gender departments, in coordination and follow up with gender units and departments within Iraqi’s ministries and provinces. this tool will be the bedrock for true and genuine work to empower women in Iraq.