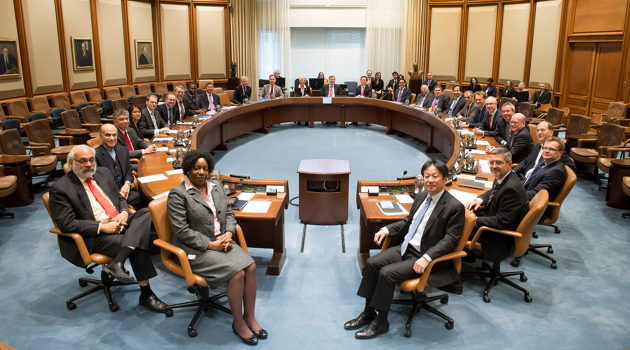 By Editor on 7th May 2019 in Iraq Industry & Trade News, Politics

An International Monetary Fund (IMF) team led by Gavin Gray visited Amman from April 26 to May 2, to hold discussions with the Iraqi authorities in the context of the 2019 Article IV Consultation.

At the end of the visit, Mr. Gray made the following statement:

“The end of the war with ISIS and a rebound in oil prices provide an opportunity to rebuild the country and address long-standing socio-economic needs. However, the challenges to achieving these objectives are formidable. The economic recovery has been sluggish, post-war reconstruction is limited, and large current spending increases risk placing the public finances and central bank reserves on an unsustainable path. Moreover, combatting corruption is critical to promote the effectiveness of public institutions and to support private-sector investment and job creation.

“Near-term vulnerabilities subsided in 2018, with the budget in surplus and a build-up in central bank reserves. Non-oil growth is expected to increase to 5.4 percent in 2019 on the back of higher investment spending. However, fiscal deficits are projected to rise over the medium term, requiring financing that may crowd out the private sector or erode central bank reserves. In these circumstances, it would be hard to sustain capital spending, and growth would slow markedly.

“Fiscal policy should aim to scale up public investment gradually while building fiscal buffers. To make space for this, staff recommends budgetary savings of around 9 percent of GDP over the medium term through tight control of current spending, particularly public-sector wages, and phased measures to boost non-oil revenue. Setting ceilings on current expenditure in the 2020 budget onwards would strengthen the fiscal framework’s capacity to support higher capital spending and to adapt to oil price shocks. Key reforms should include:

“In the financial sector, a robust plan to restructure the large public banks coupled with enhanced supervision is essential to secure financial stability and will help promote financial development and inclusion. Strengthening anti-money laundering and countering financing terrorism (AML/CFT) controls and oversight will help prevent Iraq’s financial sector from being misused for the laundering of criminal proceeds and terrorist financing.

“Addressing governance weaknesses and corruption vulnerabilities is critical to achieving the described policy objectives. As a first step, the authorities need to develop a comprehensive understanding of the corruption risks present in Iraq and then implement policies to tackle these risks in a coherent and coordinated manner. The legislative framework needs to be strengthened to effectively prevent officials from abusing their position or misusing state resources. To this end, laws strengthening the asset declaration regime and criminalizing illicit gains should be rapidly adopted. Furthermore, the independence and integrity of bodies involved in combatting corruption should be ensured and the AML/CFT regime should be mobilized to support anti-corruption efforts.

“The team will prepare a report that, subject to management approval, is tentatively scheduled to be considered by the IMF’s Executive Board in July 2019.

“The IMF team would like to thank the authorities for the candid and constructive discussions during this visit.”