By Editor on 8th July 2019 in Ahmed Tabaqchali, Investment

The market took a breather, after the blistering May rally, to end the month down -0.71% as measured by the Rabee Securities RSISX USD Index (RSISUSD), and up +0.44% for the year.

The market’s average daily turnover, excluding block transactions, followed through with the recovery of last month - a promising development especially as the Eid holidays, marking the end of Ramadan, and the beginning of summer holidays took place early in June. However, turnover is still low relative to that over the five years following the market’s peak in early 2014, with June’s average at about +21% above the average of the last year (chart below). 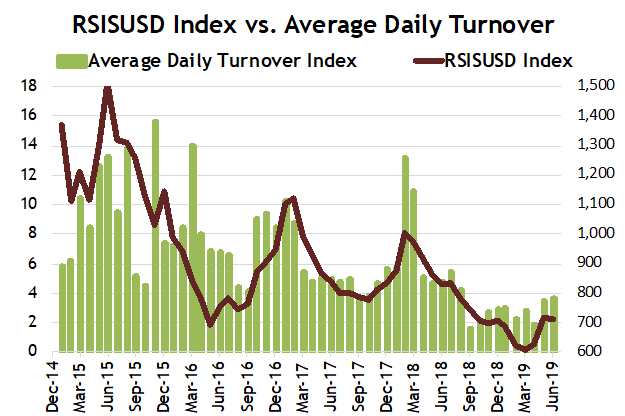 Trading activity, in the near term, will likely continue to be in-line with that of the last two months, as the holiday season gathers steam with a summer that promises to be hotter than average. June’s daily average temperatures of 48 degrees Celsius, versus prior averages of around 40 degrees Celsius, provided a taste of things to come for the year’s hottest months, i.e. July and August. The chart below of Baghdad’s June 2019 temperatures versus recent average temperatures illustrates the extent of the expected variance between this summer’s temperatures and recent averages.

June’s searing heat, as well as profit taking, took the shine off the rejuvenated banking sector with the Bank of Baghdad (BBOB) down -12.8% after being up +62.5% in May, while Mansour Bank (BMNS) was -4.2% versus +20.0% in May, National Bank of Iraq (BNOI) flat versus +31.0% in May, and Commercial Bank of Iraq (BCOI) +4.5% versus +10.0% in May. Expectations for the resumption of dividends by the Bank of Baghdad (BBOB), the reasons behind the stock’s stunning May rally, will be put to the test in the next two weeks at the bank’s upcoming AGM later in July. However, as indicated last month, it’s still too early in the year to judge the likelihood of the bank distributing dividends, especially given the size of its non-performing loans (NPL’s) and the potential need for more provisions.  Such caution finds support in the decision by the National Bank of Iraq (BNOI), at its June AGM, not to distribute dividends for a challenging 2018. However, in a sign of the conditions in place for the sector’s recovery, BNOI indicated the possibility of resuming dividend payments for 2019 based on its strong results for the first half of the year as well its expectations for the second half.

Lending support to these expectations for the brighter outlook for the banking sector are figures from the Ministry of Finance (MoF) for the first four months of the year. The figures show that the budget surplus for 2019 continues to grow and is currently at about USD 2.8 bln by end of April, which, based on current spending patterns and reported oil revenues, could grow to about USD 4.2 bln by the end of June. Helped by the healing effects of increasing oil revenues, this surplus is on top of surpluses of USD 1.6 bln for 2017 and USD 21.6 bln for 2018 as the chart below shows. 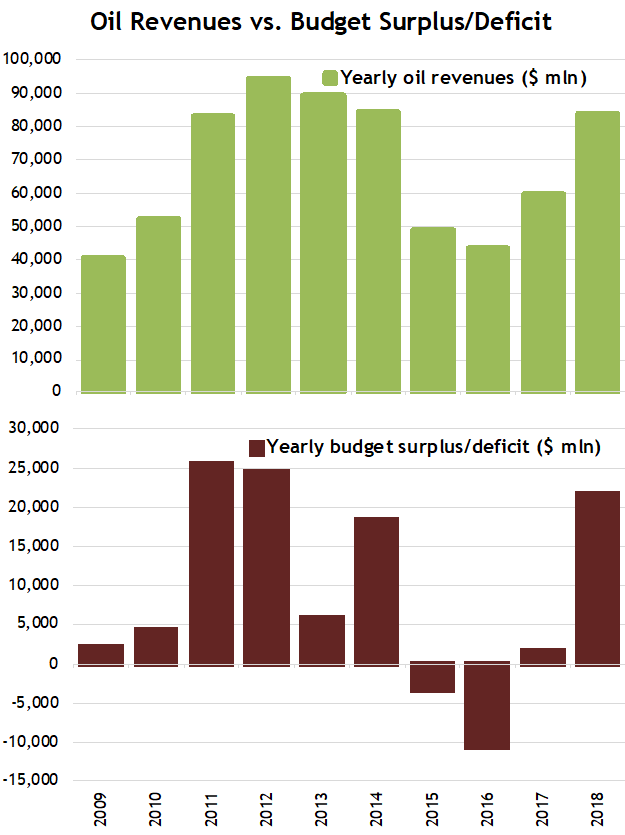 Current spending patterns, making up the bulk of the 2019 budget spending at about 75% of the total, are steady and consistent with an expansionary budget in which this spending is up +15% over 2018. Investment spending patterns, on the other hand, show a shift in gear as the government began to implement the 2019 budget, which came into law and thus into effect in late February. However, these are from a very low base and are in-line with expectations made here over the last few months that such spending would begin as a trickle but should grow as investment spending gets underway, adding fuel to a consumer led recovery, and ultimately leading to a sustained economic recovery. This potential economic fuel comes from the 2019 budget’s non-oil investment programme at about USD 12.5 bln, which is equivalent to about a 7.5% stimulus to the estimated non-oil GDP for 2019.

The persistent signs of economic recovery, continue to be mixed as they are in this early stage, nevertheless underscore the opportunity to acquire attractive assets that have yet to discount a sustainable economic recovery. The market’s pull-back in June, on the heels of a strong recovery in May on low turnover, suggests the beginning of a consolidation phase, which, would need a significant recovery in turnover before this recovery can become sustainable and for the market to claw back some of the -65.5% decline from the peak in early 2014 to June 2019 closing levels (as measured by the Rabee Securities RSISX USD Index).