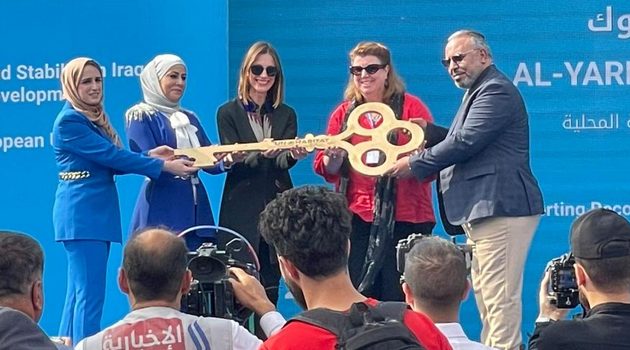 By Editor on 5th November 2022 in Iraq Public Works News

This project comes at a time when green areas and public spaces in Iraqi cities are increasingly valued by citizens, especially in cities with a low ratio of green space per capita such as Mosul. Creating leisure and meeting spaces in urban areas constitutes a significant improvement in the quality of the environment and people's living conditions. Not only they encourage different sectors of the population to mix and integrate, but they have proved to be catalysts for physical improvements and economic activities in the nearby areas, both directly and indirectly.

An important element that supports the success of the seven parks that UN-Habitat has rehabilitated in conflict-affected cities through the programme "Supporting Recovery and Stability in Iraq through Local Development" funded by European Union, has been the integration of sports and leisure facilities.  Sports have always been popular with the Iraqi people and Al Yarmouk Park offers today a football pitch, two multipurpose courts, along with an open air gym, a running track, a cycling route and an active playground for children.

After the ribbon cutting ceremony, several dignitaries spoke, including Mr. Hassan Al Allaf who emphasized the importance of environmentally friendly solutions to preserve a healthy environment and adapt to climate change.

Mr Abdul Sattar stated his satisfaction for the results and the close cooperation that was established between UN-Habitat and his team since the inception of the project. He said "This park will contribute to create social and economic values and contribute to improving the quality of life in Mosul. It is also an opportunity to promote social integration, cohesion and peace-building as it includes sports facilities and playground for people with special needs.

Just before handing over to Mr Sattar a symbolic key to the park, Ms. Egger lauded in her speech the extraordinary transformation of the park that now offers a range of activities that will bring the community together again, contributing to make this a truly transformative project. She emphasized the role of the government in replicating such initiatives in the future to promote a healthier environment in cities. The European Union has been a major contributor to UN-Habitat's post-conflict urban recovery programme in Iraq, ensuring that vulnerable households can rely on improved living conditions, better public services and livelihood opportunities in their home towns.

While speaking at the inaugural ceremony, Dr. Erfan Ali expressed his gratitude to the European Union for their generous support and emphasized the role of such projects in tackling the impact of climate change - a consideration that is particularly relevant to the UN Climate Change Conference (COP27) that will be taking place in Egypt in five days from now. He assured that UN-Habitat remains steadfast in its commitment to strengthen further the long-standing partnership with the Government of Iraq to achieve its goals for improving the lives of Iraqi citizens.

In a media interview, Mr. Wael Al-Ashhab, Head of UN-Habitat Iraq, remarked: "The recovery of this park was made possible through our staff's dedication, commitment, and hard work, but also of that of partners, such EADE, contractors, local communities and the thousands of workers - women and men - who have accompanied us in this journey." He also stated that "This project would not have been possible without the trust and collaboration of our partner UNDP who partnered with UN-Habitat to contribute to the recovery, peace-building and socio-economic stability of the country. Such partnerships have strengthened UN-Habitat's efforts and impact throughout its 25-year existence in Iraq, which we are proud to be celebrating this year."