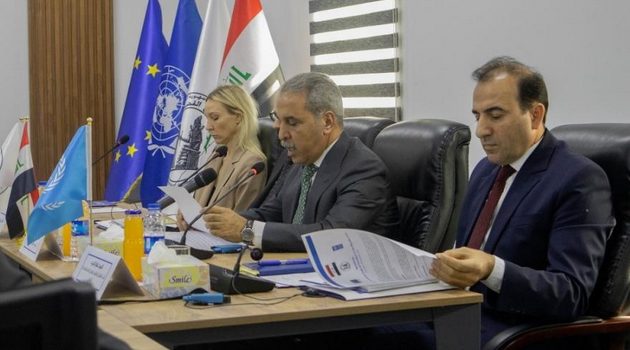 The Higher Judicial Council (HJC) and the United Nations Development Programme (UNDP) in partnership with the European Union Delegation in Iraq has today launched a Code of Conduct for judges and prosecutors across Iraq.

Recently adopted by the Higher Judicial Council, the Code of Conduct strengthens judicial integrity, impartiality, and independence, preventing undue influence and ensuring that decisions are made impartially. It calls for conflicts of interest to be duly declared and managed appropriately, supports the mandatory declaration of assets while also guaranteeing freedom of expression of opinion and association for judges and prosecutors.

The Code further enhances adherence to Human Rights standards and the Rule of Law by complying with the principles and rights stipulated by the International Declaration of Human Rights and the International Covenant on Civil and Political Rights. Moreover, one of the Code's chapters assures the commitment of all judges and members of the public prosecution to these principles.

Judge Dr. Faiq Zaidan, President of the Supreme Judicial Council, thanked the European Union and the United Nations Development Programme for their contribution to developing the capabilities of Iraqi judges. He also expressed his appreciation towards the   international community's support in preserving the independence of the judiciary and the rule of law, as it is two main pillars of the state.

The Ambassador of the European Union to Iraq, H.E. Ville Varjola, affirms:

"The Code of Conduct is an important tool in setting the desired standards of conduct expected from judges and members of the Public Prosecution Office. It enables the translation of the core values of judicial integrity, independence, and impartiality in terms of behaviour. It clarifies the ethical behaviour expected from judges and prosecutors."

"The Code of Conduct is a bold step forward in promoting a culture of integrity and transparency within the Iraqi judiciary, while preserving its prestige and dignity.

"This is one of many initiatives supported by UNDP to fight corruption. A large component of our work is focused on strengthening the judiciary as the essential driver of change in the campaign against corruption in Iraq. With the support of the EU, we will continue to help the judiciary to promote the Code and enforce its strict adherence."

EU and UNDP will continue supporting the judiciary in developing and delivering training on the Code of Conduct for judges and prosecutors.

Moreover, EU and UNDP will further support the development of Codes of Conduct for other categories of justice professionals and public officials with a key role in fighting corruption.