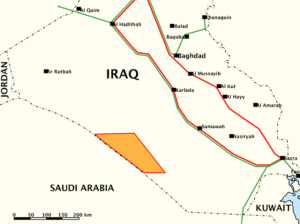 Location: The block lies within the southwestern part of Iraqi Western Desert, about 150 km southwest of Al Najaf and covers an area of around 9,000 km2. The block is bounded on the west by the Iraqi-Saudi border line.

The block is in the Rutbah-Jezira tectonic zone and includes numerous undrilled structures.

The block was offered in the fourth oil licensing round in 2012, but no bids were received.

Petrel Resources' claims it was awarded Block 6 in 2002 "subject to ratification"; According to Iraq Business News' Expert Blogger Ahmed Mousa Jiyad, "Its claim of 2002 agreement with the Oil Ministry in Baghdad on an exploration contract over 10,000 sq km in the Western Desert was not supported by credible legal documents. Moreover, the company was not even qualified by the ministry for any bid round when the company applied for such qualification between 2009 and 2011."