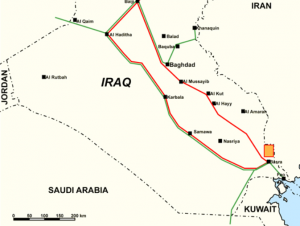 Controlled by: Ministry of Oil

Location: The block lies in the southern part of Iraq, approximately 20 km north of Basra city adjacent to the Iraq-Iran border and covers an area of around 900 km2. It is close to infrastructure and numerous producing and appraised oil fields.

In a statement to the Hong Kong Stock Exchange, UEG said:

"Kuwait Energy Basra Limited is a limited liability company incorporated in British Virgin Islands and an indirect wholly-owned subsidiary of the Company.

Contract duration: If Block 9 is found to be commercial during the five-year exploration period, during which time the consortium is eligible for a possible renewal for another two years twice, the consortium is automatically eligible for 20-year development and production phases, extendable by a further five years.

Remuneration: $6.24 per barrel of oil