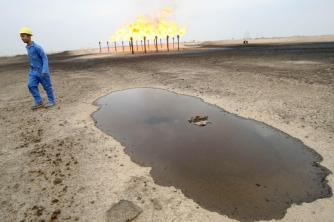 Sabah Assaidi, Deputy Head of legal section of Iraq Oil Ministry petroleum contracts and licensing directorate told Alsumaria News website he expects the output of Iraq middle oil fields to reach more than 400000 barrels per day during the next few years after founding Naft Al Wassat Company and offering these fields for development.

Assem Jihad, Iraq Oil Ministry Spokesman said that the ministry had previously submitted a proposal to the Cabinet to establish a fourth company in order to manage oil fields in the middle of the country along with the 3 already existing companies. The Ministry of Finance would allocate 100 billion dinars in order to establish this company the kernel of which would be the committee of Middle refinery, Baghdad Branch, the spokesman said, adding that the company would provide jobs for unemployed as well as oil and engineering institutes’ graduates.

The Ministry of Oil would unpeg some directorates from the Ministry and annex the same to Naft Al Wassat Company in order to speed up establishing the company and to decrease the pressure which other companies are undergoing, Jihad uttered.