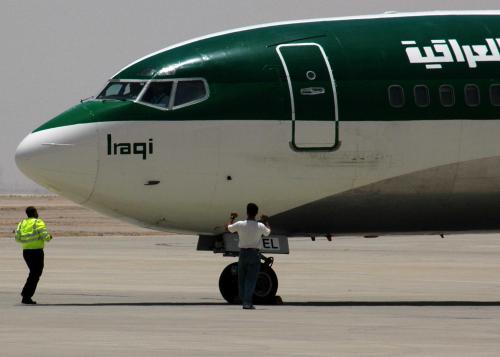 By GavinJones on 26th April 2010 in Iraq Transportation News

The Iraqi Airways airliner arrived at the airport's south terminal at 11.08pm, the first since the United Nations imposed sanctions on Iraq following Saddam Hussein's invasion of Kuwait in 1990.

The historic resumption of the London-Baghdad route had been delayed for nine days due to flight restrictions imposed across Europe because of the ash cloud from Iceland's Eyjafjallajökull volcano.

A spokesman for BAA, which runs Gatwick airport, said: "We expect there to be a twice weekly service, on Sunday and Wednesday. This flight should have happened last week but it was affected by the ash cloud."

Flight IA237 left Baghdad at middday on Sunday (1200 GMT), flying to London via Malmo in Sweden.

The BAA spokesman said he expected the flights would in future be direct, although Iraqi officials suggested only the return journey would be.

"There will be two flights a week now. They will fly via Malmo on the way out but the return flight will be direct," Iraq's civil aviation director Adnan Blebil told the AFP news agency yesterday.

The Iraqi transport ministry website said the announcement of the flight was received "with joy and pleasure" by exiles in London who previously needed to take several flights to return home.

There were 30 passengers on board, including the Iraqi transport minister Amer Abduljabbar Ismail and Iraqi Airways chief executive Kifah Hassan, according to AFP.