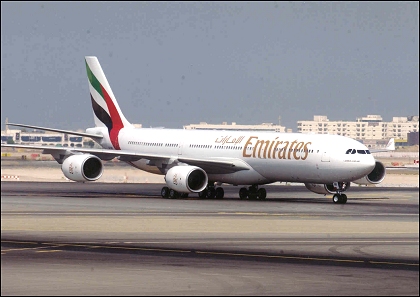 By GavinJones on 11th May 2010 in Iraq Transportation News

Dubai Gulf airlines are looking at the lucrative Iraqi market for increased passenger traffic. Dubai's Emirates yesterday said it will launch flights to Baghdad from July 1, following the announcement by Etihad Airways.

The move also reflects growing confidence in the security situation in the war-torn country.

"Baghdad will be Emirates' 103rd international destination, and one of six new destinations to be launched by the airline this year including Tokyo — which began on March 28 — Amsterdam, Prague, Madrid and Dakar," the airline said in a statement.

Iraq is the last remaining Middle Eastern destination to be serviced by Emirates. The carrier's current number of weekly Middle Eastern flights totals 197 in 10 countries.

Shaikh Ahmad Bin Saeed Al Maktoum, President of Dubai Civil Aviation and Chairman and Chief Executive of Emirates airline and Group, said: "The launch of services to Baghdad highlights our steadfast commitment to connecting the Arab world with the rest of the globe."

The new services will help Iraqi traders secure businesses faster from the UAE.

"Iraq is well on the road to recovery and we are confident that the time is right to commence our operations there. There is a high proportion of traffic heading both in and out of Iraq and we are in the right position to capitalise on this demand. 2010 is set to be a strong year for Emirates and with a steady stream of new aircraft and six new destinations on the map we continue to defy industry expectations," he said.

Initially Emirates will operate a thrice weekly. The route will be serviced by an Airbus A330-200, offering a three-class configuration of 12 First Class, 42 Business Class and 183 Economy Class seats.

Emirates expects to uplift around 10-12 tonnes of cargo per flight, using the belly hold capacity on the wide-bodied passenger aircraft.