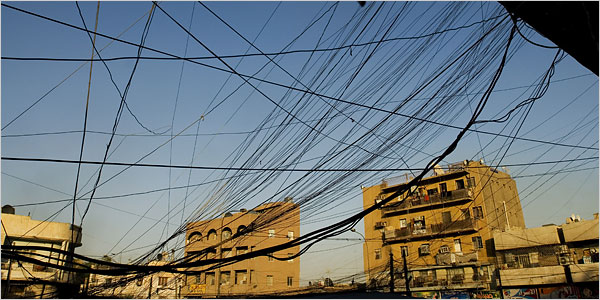 By GavinJones on 31st May 2010 in Construction & Engineering In Iraq

China's top power equipment maker Shanghai Electric is moving ahead with a $1 billion power-generating plant to boost Iraq's electricity capacity by 1,320 megawatts, officials said on Saturday. The planned steam power plant in the town of Zubaidiya near the city of Kut, 150 km (95 miles) southeast of Baghdad, is seen as one of the biggest power projects in the country, where intermittent electricity is one of the public's top complaints. Seven years after the U.S.-led invasion, Iraq's national grid still only supplies a few hours of power each day.

Iraq's dilapidated infrastructure has been hit hard by years of war, insurgency attacks and underinvestment. The project, which includes purchasing and installing four steam turbines, each with a capacity of 330 MW, will provide Iraq with a big power increase over the next four years, both Iraqi and Chinese officials said. Work to install those units started earlier this month and the first unit is expected to operate after three years. "It is a big project, it is considered one of the biggest power plants in Iraq," said Hameed al-Ibrahimi, an official in the Iraqi Ministry of Electricity, who is in charge of the project. "Iraq is in need of (any) 100 MW," he told Reuters at the project's site.

The Ministry of Electricity puts Iraq's available power capacity at 9,000 MW, and installed capacity at 11,000 to 12,000 MW. Demand is estimated to be at least 12,000 MW. The idea for the project is almost 10 years old. When Iraq's first talks with China's Shanghai started, it was to build a factory to manufacture power turbines. The plan was put on hold for years due to economic sanctions imposed on Iraq followed by years of bloodshed unleashed by the 2003 U.S.-led invasion. As security conditions slowly improve across the country, Iraq has revived and revamped the project. It signed the contract with Shanghai in 2007, but it was again delayed due to security concerns and unavailability of land for the plant.

Now work is ramping up with a handful of Chinese engineers and staff already on the ground as a camp is being built to accommodate the expected influx of workers over the next few months. The plan is to get at least 100 more Chinese workers in the coming two to three weeks as the pace of work increases, said Cao Linjun, the site manager from Shanghai Electric, dismissing security concerns as an obstacle. "If I feel afraid, I will not come here," he said during a visit to the plant, which was protected by three security units, an emergency police unit, an army unit along with other guards. Iraq is trying to shake off the legacy of years of violence and economic decline by luring foreign investment and expertise to help it rebuild. Violence has fallen sharply in the last two years, but daily bombs and killings are still common.

One Response to China’s Shanghai Electric in $1bn Power Deal