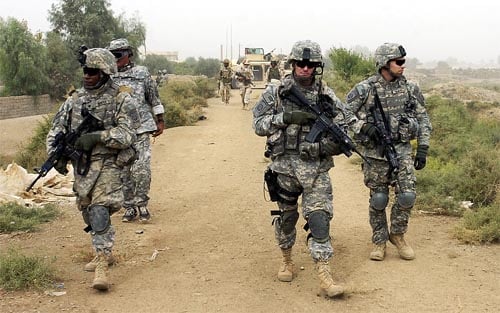 For those who have followed Iraqi security on a daily basis since 2003, if not before, the current security situation in Iraq is nothing short of a miracle. In the dark days of 2006, the daily listing of violent incidents was 150 or 200-long, and we all knew that much of the sectarian cleansing was not even being counted. Nowadays, Iraq suffers about twenty reported incidents a day, which probably captures at least half of the serious acts of violence that occur. It is hard not to be staggered and relieved by the improvement.

That said, there is no hiding the fact that we have hit a plateau in the levels of violence in Iraq. In the latter parts of 2008, the number of violent incidents in Iraq rapidly declined. In 2009, the incident levels continued to reduce, albeit at a far slower rate, and some months the totals even rebounded upwards. Those with access to the details of the daily incidents agreed that the effectiveness of militant attacks was steadily declining, but it had to be faced that the major leaps forward were behind us and the future was instead going to be a long slow slog to stabilization. In 2010, the situation has looked even more tenuous, with national levels of incidents swinging up and down on a monthly basis. The lack of a new government has deepenedthe sense of unease. So what is really happening in Iraqi security and how should potential investors view the future?

To critically assess the nature of security in Iraq, it is important to review both the quantitative metrics of security incidents and also the qualitative details of everyday violence across Iraq. When these approaches are combined, it is clear that progress has slowed . In May 2010, 595 security incidents were reported to the Iraqi Security Forces (ISF), compared to 637 in April; 810 in March; 576 in February; and 618 in January. The 595 incidents are a major improvement on the same month in previous years, such as May 2009 (1,040 incidents); May 2008 (2,335 incidents); and May 2007 (3,930 incidents). Even so, there has been no security improvement in a year.  Growing tension in Baghdad is a key driver of the increase in incidents; in May 2009 there were 241 incidents compared to 233 in April and an average of 204 each month in the first quarter of 2010. Though this is far better than previous years - 848 incidents in May 2008, for instance - it does mean that Baghdad is basically at the same level of insecurity it suffered a year ago (254 incidents in May 2009).  Though most parts of Iraq are either improving or are largely stabilized already, the stasis or slight slippage in security in Baghdad is unsettling.

Though the situation bears close and constant evaluation, there is no need to panic. The key check on destabilization - the ISF- remain strong.  Though the US draw down has slowed the rate of improvement in the ISF, the security forces continue to function effectively and show no signs of disintegrating along communitarian or political lines.  Likewise, the insurgency continues to disintegrate into a soup of isolated quasi-criminal groups. The quality of attacks initiated by militant groups remains low and many incidents are unsuccessful attacks, foiled attacks or amateurish attention-grabbing incidents.  Across the federal-Kurdish line of control, the indicators are hopeful rather than concerning, with signs that the US will continue to underwrite confidence-building and joint patrolling up to and beyond formal US military withdrawal in December 2011.

The tension in Iraqi politics is evident for all to see and the political atmosphere has been toxic for months. Yet whilst the slowness of government formation is a contributing factor to increased violence, Iraqis are not attacking each other in greater numbers just to make some abstract political point. The details of each day's violence tell the story:  a Sons of Iraq leader faces a doorstep assassination attempt; a municipal worker finds a bomb attached to the underside of his car;  a drive-by shooting kills a soldier at a checkpoint; a policeman disappears on his way home from a shift. The sheer availability of weapons and military explosives mean that Iraqi citizens can resolve even petty feuds with high levels of armed force. And at the tail-end of decades of dictatorship and a long counter-insurgency campaign  there are many many scores to settle.  This is why the Sons of Iraq are so concerned about government attempts to disarm them whilst insurgents still wait in the wings to exact vengeance on the US-recruited militiamen.

Such deep-seated issues are more important drivers of violence than delayed government formation, and thus the eventual seating of a new government is unlikely to significantly improve security in Iraq. The easily-detached elements of the militant community are gone; the hard core that remains will take far longer to grind down and will likely dissolve into  well-armed organized criminal networks rather than disappear. As there will likely not be either a breakthrough or a breakdown in security for the next few years, investors need to accept that Iraq will continue to face an Algerian-type model of insecurity, whereby risks are graduated in different parts of the country and are increasingly criminal in nature. Baghdad will continue to be an expensive place to visit due to the need to take sensible precautions about security in the capital. Some parts of northern Iraq will face the same severe insurgent threats as the more dangerous  rural parts of Sudan, Algeria, Nigeria or other conflict zones. Other parts of Iraq - notably Basrah, the Kurdistan Regional Government and pockets of southern, central and western Iraq - may be far more permissive to the discerning investor who takes the time to look closely at the local political and security situation. The devil is increasingly in the detail when it comes to Iraqi security, creating competitive opportunities for those prepared to dig a little deeper than their competitors.

Dr Michael Knights is Vice President and lead Iraq analyst at Olive Group, the  first security company to operate in Iraq.  He has  worked on Iraqi political and security risks since the mid-1990s, first as an oil and gas journalist and later as an academic, receiving his PhD on Iraq at the Department of War Studies, King's College London.  Since 2003, Dr Knights has run the Washington Institute for Near East Policy's Iraq programme, advising US government agencies on Iraq policy and publishing a series of books on local politics and security in Basrah, Maysan, Dhi Qar and the northern provinces including Kirkuk.  Since joining Olive Group in 2006, he has produced in-depth social and political analysis of 26 of Iraq's major oil and gas fields and keeps a close eye on national security and politics.

He can be contacted at [email protected]