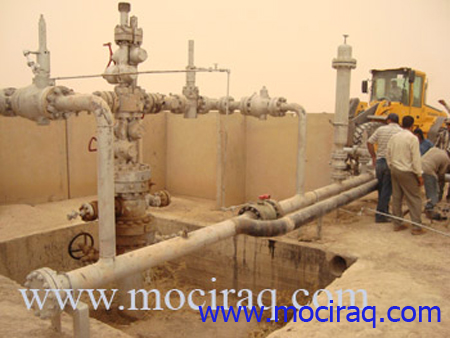 Special equipment to dig 20 oil wells arrived in the al-Bazerkan oilfield in Amara, according to the media director of the Missan Oil Company.

“The project will contribute to raising the production capacity of the company,” he explained.

“The production capacity of each well ranges from 20 to 30 thousand barrels daily and the investment contract concluded with the company stipulates digging the wells within 31 months at a cost of $224 million,” Engineer Walied Khaled, representing the U.S. company, told Aswat al-Iraq news agency.

Iraq has opened the doors to foreign oil companies through two bidding rounds for oilfield servicing contracts, and has also invited specific foreign firms to compete for development contracts in others.

Iraq needs foreign companies to invest in drilling more oil wells as it does not have the capacity on its own to more than double output of 2.3-2.4 million barrels per day of crude, its oil minister has said.

Iraq, which plans to raise its oil output capacity to 6 million bpd in five-six years, holds the world’s third-largest proven oil reserves, but its fields are largely underexploited due to decades of war, sanctions and underinvestment.