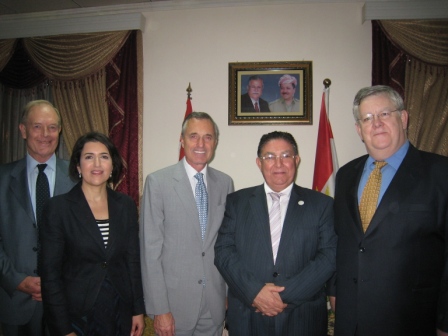 By Editor on 25th October 2010 in Iraq Industry & Trade News

The largest ever British trade delegation to visit the Kurdistan Region last week participated in Erbil International Fair. The delegation was lead by Sir Andrew Cahn, the Chief Executive of UK Trade and Investment (UKTI), the British government department that spearheads international trade with the UK.

The mission comprised 53 representatives from 39 British companies and trade associations. Nine of the companies exhibited individually, and UKTI had a British pavilion at the fair to represent the other companies.

Sir Andrew said, “This is my first visit to Erbil, but it will not be my last. The UK and the Kurdistan Region have deep and long ties." Sir Andrew cited the British companies that have already worked in the region, such as Parsons Brinckerhoff, HSBC, Scott Wilson, Costain, JCB and B-Plan. He added, “Now UKTI has a local member of staff in Erbil who can offer more help to British companies wishing to enter the region. There is a great deal of business to be done between the UK and Kurdistan."