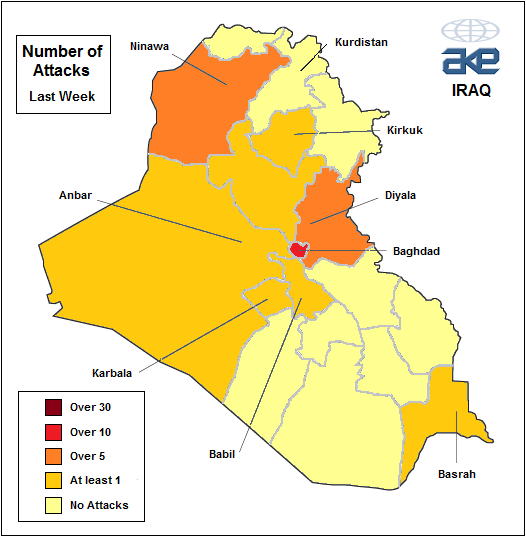 Last week was one of the most violent in Iraq for several months. Over 120 people were killed and several hundred injured in a spate of suicide attacks. The total number of attacks reported did not significantly increase, but with at least seven of the attacks involving suicide bombers in very crowded areas it is no surprise that the death toll was so high. The majority of attacks targeted Shi'ah pilgrims on their way to Karbala to commemorate Arba'een, but several also targeted the security forces in blasts implicating Ba'qubah, Baghdad, Mosul and Tikrit. Meanwhile in contrast the south of Iraq and Kurdistan saw no violent incidents at all.

While the attacks of last week were concentrated in the central provinces at least one suicide attack occurred in Mosul. The police managed to spot a suspicious vehicle as it approached a checkpoint in the city. When it failed to comply with their instructions they opened fire, causing the explosives inside the vehicle to detonate. The two occupants of the car were killed but no other casualties were reported. While Mosul remains one of the country's more hazardous areas, the police continue to improve their capabilities. Indeed it could be argued that they are more experienced and "battle-hardened" than forces elsewhere in the country. Nonetheless in such a tense environment mistakes can still be made and personnel travelling in the area should take care not to drive suspiciously or erratically. Comply with police requests at checkpoints. Elsewhere in the north Kurdistan saw no incidents of violence, while Ta'mim province saw only one attack, with gunmen shooting at a joint US-Iraqi checkpoint in the Laylan area south of Kirkuk.

Last week was the bloodiest in the central region since this analyst started collating casualty figures on the region in 2007. As warned in previous updates, terrorists targeted Shi'ah pilgrims as they travelled to Karbala to commemorate Arba'een. The tactic of choice was suicide bombing, and the target was large crowds of people. This type of attack has always incurred a high number of casualties. Suicide bombings were recorded in Ba’qubah, Dourah (in Baghdad), Karbala, Mosul, Ramadi and Tikrit, leaving well over 100 people dead and over 400 injured. Now that Arba’een has concluded pilgrims have begun returning to their homes (often overseas, including in Iran and Bahrain). Further roadside attacks are to be anticipated, as should increased security measures on key routes around the centre of the country, but in general the frequency of attacks is now expected to decline. 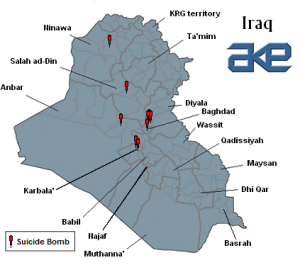 Map of the Latest Suicide Bombings

As many Shi’ah pilgrims travelled from the southern provinces towards Karbala, security measures were heightened on several roads in the region. However, no major security incidents were recorded. The area remains considerably quieter than the central and northern provinces of the country, although this should not be taken as grounds for complacency. Criminal and even politically motivated terrorist groups still operate in the region and foreign firms need to ensure that they are protected. Foreign commercial interests are not currently being singled out for attacks but the US military continues to suffer roadside bombings, even around well used assets such as Basra International Airport. As such, the threat posed by southern militants is much lower than in the years prior to 2008, but it has certainly not diminished.