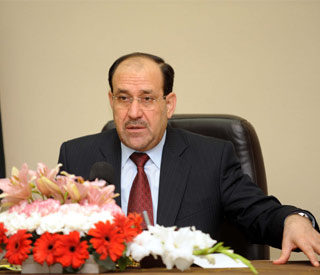 By Editor on 5th February 2011 in Politics

Iraqi Prime Minister Nouri al-Maliki has said he would give up half of his salary, and will not stand for re-election.

According to Reuters, Maliki's media advisor, Ali al-Moussawi, said the premier would forego 50 percent of his $30,000 monthly paycheck to bring his salary closer to other government employees.

"He feels there is a huge difference and says this leads to a kind of caste system in society," Moussawi said. Maliki made the announcement in a statement late on Friday.

Hundreds of people gathered in Baghdad on Saturday to demand better basic services. On Thursday, police fired on protesters making similar demands near the southern city of Diwaniya.

Maliki was confirmed for a second term in December after nine months of political squabbling over a new government following an inconclusive parliamentary election in March.

He told Agence France-Presse: "The constitution does not prevent a third, fourth or fifth term, but I have personally decided not to seek another term after this one. I support the insertion of a paragraph in the constitution that the prime minister gets only two turns, only eight years, and I think that's enough."

Iraqis complain bitterly about basic services. The national grid supplies only a few hours of electricity a day in a nation where temperatures rise above 50 degrees Celsius in the summer.

Members of parliament make $27,000 a month, according to Safia al-Suhail, a lawmaker from Maliki's State of Law political bloc, but have to pay from their salaries the cost of up to 30 personal security guards who make $635 each per month. Teachers earn about $350 a month.

"I admit that there is no social fairness between the government employees," Suhail said.

14 Responses to Maliki Takes Salary Cut, Will Not Stand For Re-Election