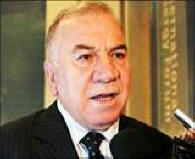 They also discussed a possible 'reoperation' of a Syrian-Iraqi oil pipeline once it is rehabilitated, and closer cooperation between both countries' ministries of oil.

Following the talks, the Syrian minister told reporters that they had considered tripartite cooperation involving Syria, Iraq and Iran for setting up a gas pipeline that can carry Iranian gas to Syria in the future and then link it to the Arab gas pipeline.

He added that oil officials from both sides would meet in Baghdad soon to discuss the reoperation of the oil gas pipeline.

The Iraqi minister said the gas pipeline would be subject to a swift maintenance program with a view to exporting Iraqi oil via Syria.

He added that his country would establish new four oil refineries with a capacity of 750,000 barrels per day, welcoming Arab involvement in such projects.

One Response to Syria and Iraq Discuss Oil Pipeline