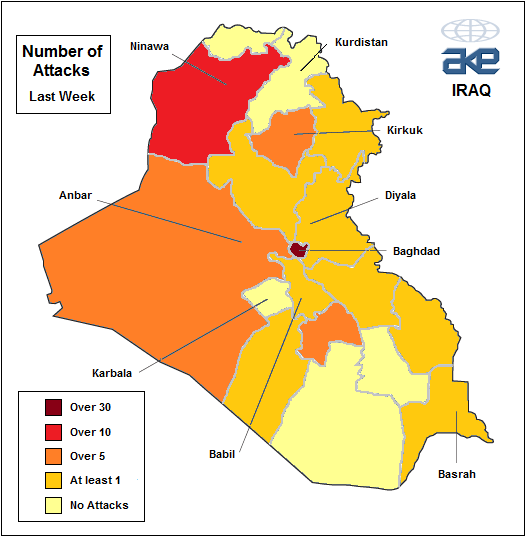 By JohnDrake on 30th March 2011 in Weekly Security Update

Levels of violence continue to creep up in Iraq. Tuesday’s deadly attack on a government building in Tikrit serves as a reminder that terrorist groups retain the ability to conduct horrific attacks in the country. Otherwise terrorist activity was concentrated in Baghdad and Mosul. The south saw a slight rise in activity but it remains quieter than the rest of the country. Halabjah in Kurdistan also saw a violent protest, which resulted in the death of two police officers. Other hotspots for violence included Fallujah in Anbar province and Kirkuk in Ta'mim province.

Ongoing demands for political reform continue to stoke protests and violent unrest in Kurdistan. Last week saw one protest in Halabjah descend into violence, which resulted in several injuries and the death of two police officers. While the region is more democratic than most of the others suffering unrest in the Middle East there are still demands for reform and a reduction in corruption in the Kurdish provinces. Elsewhere in the north, tensions continue to rise in Kirkuk, with Arab and Turkmen students clashing in the city on Monday. At the time of writing, Reuters has reported that a new Kurdish governor has been appointed in the city, as well as a Turkmen provincial council head. This will likely stoke tensions further and could lead to a rise in vigilante and even terrorist attacks against Kurdish and Turkmen citizens in the city, as well as retaliatory attacks by vigilantes from these communities.

Levels of violence had been falling in the central provinces over the past week. However, this trend ended when terrorists stormed a provincial government building in Tikrit, killing over 50 people and injuring up to 100. A variety of tactics were involved, including grenade throwing, hostage taking, shooting and point-blank range and suicide bombing. At the time of writing no group has claimed responsibility for the attack, but the incident resembles a similar ‘siege and suicide’ attack on a Baghdad church in October 2010 which was later claimed by the Islamic State of Iraq. By attacking a government facility the aim of the responsible group was likely to undermine the credibility of the state and raise community fears that the police and army will not be able to protect the country once the US military withdraws at the end of the year.

The capital saw a return of targeted assassinations last week, with several civic employees and senior members of the security forces attacked in shooting and bomb attacks around the city. Few measures have been initiated to tackle the problem in light of the violence, so these targeted killings are likely to continue for the time being. Officials have blamed the victims for a lack of vigilance, which may be a little unfair, but personnel are nonetheless reminded to exercise caution when moving around the city. Conditions are far improved from 2008 and earlier years but the city cannot be viewed as 'safe'. Recent days have also seen an increase in mortar attacks around the city centre, with a hotel near Abu Nawas street being hit on Tuesday.

There was a slight increase in violence in the south of Iraq last week, although conditions remain quieter than most of the rest of the country. Incidents were concentrated around Amarah in Maysan province and Diwaniyah in Qadissiyah province. Indirect fire (rockets and mortars) remains a concern for fortified interests such as military bases. High-profile US military convoys also remain at risk of being targeted in roadside bombing attacks.