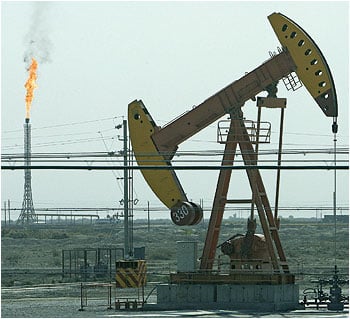 Reuters reports that iraq's oil ministry has asked consultants to draw up a plan with a lower output level and longer timeframe to achieve its oil output plans.

Iraq's existing deals with international oil firms aim to boost its output capacity to 12 million bpd by 2017 from around 2.95 million bpd currently.

But Iraq has since come under pressure to reopen talks with oil firms and abandon the 12 million bpd target by 2017 due to infrastructure constraints.

In September, Iraq’s oil minister said a production capacity target of 8.0-8.5 million barrel per day for the contracts was “more suitable” than the 12 million bpd, and the plateau production period could be extended to 13 or 14 years rather than the current seven years.

Deputy Prime Minister for Energy Affairs Hussain Al Shahristani said no final decision has been made yet and saw no rush in making it. “Now we have two or three years before we need to take such a decision, so there is no need to rush in taking this decision,” he said.

He also said he expected oil production to increase by 500,000 bpd next year.

At a recent conference in London, Shahristani explained that the 12 million bpd figure was for capacity, rather than actual output.