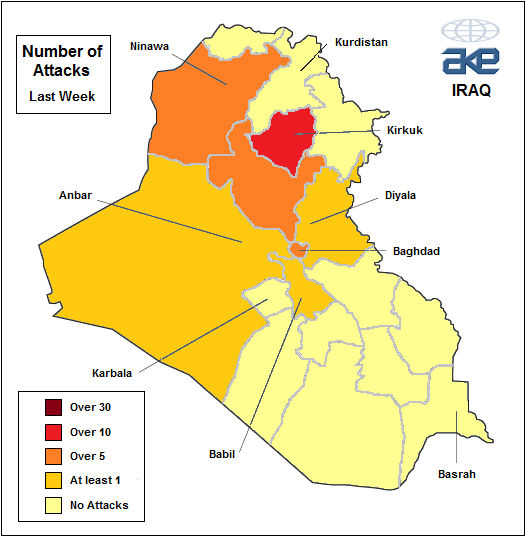 By JohnDrake on 5th January 2012 in Weekly Security Update

Levels of violence fell in Iraq over the past week, a welcome change following the spate of attacks on 22 December. At least 20 people were killed and 82 injured nationwide. This is at the lowest end of the usual figure range of 20 to 90 fatalities in any given seven-day period over recent months. In total, a fall in the number of countrywide bomb attacks left 12 people dead and 40 injured. A notable drop in small arms attacks left 10 people dead and three injured. A higher than normal number of indirect fire attacks (rockets and mortars) left five people injured. 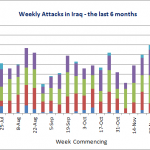 Centre
Conditions were quieter than normal in the central provinces, with a scattering of incidents in Anbar, Diyala and Babil provinces. Salah ad-Din had slightly more attacks but still not sufficiently enough to cause undue alarm over the region. A number of open sources have warned that al-Qaeda cells are being re-activated in the region, particularly in Diyala province. While conditions have not yet escalated as a result of any such activation, caution should still be exercised and organisations should continue to monitor the situation closely. Last week, Baghdad also saw a decline in violence, but it was still the subject of a suicide bombing against the Interior Ministry earlier in the week and the security forces remain on guard after the bloody attacks of 22 December.

South
There were no major incidents of violence recorded in the south of the country last week. As usual, it remains far quieter than the central and northern provinces, but with emerging clashes between rival Shi’ah militant organisations in the country it should still be regarded as potentially volatile. Conditions could worsen now that the US military has withdrawn from the country. Many are concerned that groups with links to Iranian elements may in particular step up their efforts to consolidate their position in the region. Western organisations in particular should continue to regard security as a major requirement for any sustainable business operations in the south.