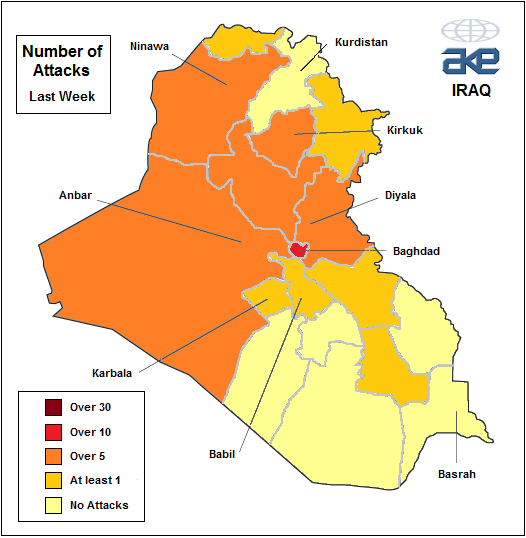 By JohnDrake on 13th January 2012 in Weekly Security Update

The year 2012 has not begun well for Iraq. Levels of violence rose in the country last week, with at least 107 people killed and 300 injured in nationwide incidents. Several of the latest bombings have targeted pilgrims gathering in the centre of the country to mark Arba’een. The holy religious period is currently at its culmination, but attacks may continue over the coming days as worshippers return home following the conclusion.

North
In Ninawa province violence was concentrated in the city of Mosul while attacks were dispersed through the province of Ta’mim, where the contested city of Kirkuk is located. Kurdish Regional Government (KRG) territory also saw a number of violent incidents, but they were largely related to low-level criminality and local disputes rather than politics or terrorism. Perhaps the most notable incident in the north was an explosive attack directed against equipment belonging to Angolan energy firm Sonangol. No-one was harmed during the incident but the attack serves as a reminder that oil and gas firms remain an attractive target for militants in the country. They are a political pressure point for groups trying to send a signal to the government, as well as an emblematic representation of the international community. The fact that many of these firms work in parts of the country (and wider world) where operational risks can be quite high means that safety and security will continue to play a major role in the industry. Indeed, perhaps there is no sector better equipped for the rigours of a hostile environment than those already compliant with extensive industry-wide HSEQ legislation. 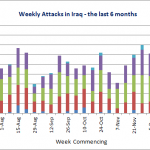 Centre
Much of the violence last week was concentrated in the centre of the country. Security measures are currently heightened as the country marks the Shi’ah holy period of Arba’een. The event sees numerous Shi’ah pilgrims converging on mosques and shrines, particularly in Karbala. Terrorist attacks targeting the event should be anticipated over the coming days and large crowds should be avoided. At least four people were kidnapped in Iraq over the course of the week, including a Turkmen contractor who managed to escape within 24 hours of his abduction in northern Salah ad-Din province. Another kidnap victim, held for an unspecific period of time was also rescued during an operation in Diyala province. The police regularly manage to free kidnap victims in the country, which is re-assuring as regards their growing abilities. However, it is likely that many more kidnap cases go unreported and unsolved. Conditions are not as bad as during earlier years when the kidnap industry was widespread and highly lucrative, but it certainly remains a concern in the country. AKE has just released its quarterly kidnap report. If you would like to enquire about purchasing a copy please email [email protected]

South
The southern region remains one of the quietest parts of the country with very few incidents of violence recorded last week. However, a suicide bomb targeted a gathering of Shi’ah pilgrims in Dhi Qar province, killing at least 44 people and injuring over 80. The attack was the first in Dhi Qar province in 10 weeks and the first suicide bombing in the south of the country in over four months. Security searches along the Baghdad-Nassiriyah highway were increased and are likely to remain fairly rigorous for at least a week as Arba’een draws to a close.

One Response to Weekly Security Update for 13th January 2012