By JohnDrake on 22nd February 2012 in Weekly Security Update

North
AKE has tracked a notable decline in violence in Ninawa province over the past two weeks. While the police have conducted a number of recent raids in the area which may have led to a lull in militant activity there is growing speculation that al-Qaeda fighters from northern Iraq may be shifting their focus away from the country and towards neighbouring Syria. This would explain the recent decline in activity around Mosul but would bode ill for Iraq’s neighbour. 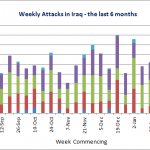 Centre
Diyala province was the most hostile part of Iraq last week, with incidents concentrated between Ba’qubah and Jalawlah towns. Babil was very quiet in contrast. Even the normally stable province of Wassit saw at least one attack and numerous police operations targeting suspected criminals and terrorists. Baghdad has been quieter than normal over recent weeks but the weekend attack on a police academy illustrates the fact that terrorists can still overcome the security measures in place in the city. These measures are currently being tested ahead of the Arab League summit at the end of March and while they are likely to help reduce the overall number of security incidents taking place in the city they should not be regarded as exhaustive.

South
The southern provinces remain far quieter than the central provinces but they nonetheless continue to see sporadic incidents. There were numerous police operations last week in cities such as Nassiriyah and Basrah. Dozens of suspected criminals and terrorists were arrested, highlighting the fact that threat groups still exist in the region, and caution still needs to be exercised.