By JohnDrake on 8th March 2012 in Weekly Security Update

Levels of violence fell in Iraq last week, although the welcome trend was cut short on Sunday night. Militants wearing security force uniforms shot dead at least 27 police officers in a well-planned attack in Haditha. Not including this total, at least 36 people were killed and 41 injured in nationwide incidents last week.

February Trends
In general, levels of violence crept up in Iraq towards the end of February, although in review it was a relatively quiet month. The authorities reported a total of 151 fatalities, including 91 civilians, 39 policemen and 21 soldiers killed by militants during the month. Last week a drop by almost half in the total of bomb attacks left 19 people dead and 35 injured countrywide. There was no major change in the number of small arms attacks reported which left 11 people dead and three injured. Indirect fire attacks (rockets and mortars) left two dead and three injured. 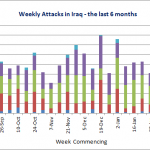 Geographic spread
Baghdad remains quieter than normal, although it still accounted for several of the week’s attacks, as did the northern city of Mosul where conditions appear to have gradually worsened once again after an unusual quiet period over recent weeks. The south of the country remains quiet, with many expressing optimism over the potential for growth and development in the region. Nonetheless security risks and the potential for wider unrest persists.

There were two shooting incidents reported in the normally secure Kurdish region last week, although they are believed to have been related to personal disputes rather than politics or ideology. At least one person was also killed in a landmine explosion to the north-east of Kirkuk, highlighting the ongoing risk posed by unexploded ordnance – even in secure parts of KRG territory.

Kidnap risk
Perhaps more positively was a police operation on 6 March which reportedly led to the freeing of a hostage civilian held in Ta’mim province. While the Iraqi security forces continue to report successes in tracking down kidnap victims whilst also detaining their captors, the issue of kidnap for ransom remains a major one which personnel need to face, regardless of whether they are foreign or Iraqi. Foreigners in particular remain attractive from a kidnapper’s point of view because of the potentially large ransom they might be able to negotiate in return for their release. Proper risk mitigation measures therefore need to be in place prior to doing business in the country.