By Gary Sandiford on 17th October 2012 in Weekly Security Update

The total number of reported incidents in Iraq for the period 8 – 14 October 2012 was 110.  This was decrease from last week’s figure of 116, and is now slightly below the 2012 weekly average.  This represents a continuation in reduced reporting right across the country.  However, it is not yet possible to determine if this marks an end to the major effort seen during the summer months, or merely represents a temporary lull as insurgent groups replenish ahead of renewed attacks in the coming weeks.  As per usual the South East and South Central Regions (excluding northern Babil and Wasit Provinces) recorded the fewest incidents, with most activity likely reflecting criminal, political or communal disputes.  This reflects long term patterns in majority Shia southern areas, where there is no programmatic resistance to the Iraqi state and where militia activity has been largely curtailed.  Elsewhere in the country - in areas more usually associated with Sunni Arab insurgent activity and high levels of violence - reporting was also subdued relative to recent months.  In particular Anbar, southern Salah al-Din, northern Babil and the Diyala River Valley were all unusually quiet, with very few violent incidents being reported.  While Baghdad (including its rural southern belt), the upper Tigris River Valley and Mosul were more active, these areas also remained relatively quiet in terms of both quantity and quality of reported incidents. 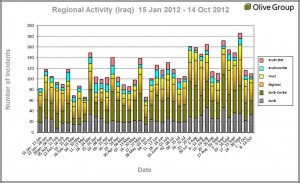