By Gary Sandiford on 28th November 2012 in Weekly Security Update

The total number of reported incidents in Iraq for the period 19-25 November 2012 was 119.  This is on par with the 2012 weekly average of 118 and is a decrease on last week’s total of 137.  As per the norm, the situation throughout the country was highly variable between regions and provinces.  The North and North Central regions continue to experience the highest proportion of incidents, although both experienced reduced levels of activity this week, although variations were seen within the provinces of these regions, with incident levels doubling in Salah al-Din, yet dramatically reducing in Diyala.  The increased security posture in Baghdad for Ashura likely contributed to decline in figures from the capital.  In the West Region, most of the incidents were reported from the environs of Fallujah but were much reduced than last week.  The South Central Region witnessed increased incident figures, related to attacks on Shia pilgrims transiting through the province to Karbala.  The security plan in the South East Region could be considered successes; as only a few low-level incidents were reported this week. 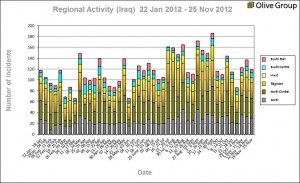