By Gary Sandiford on 19th December 2012 in Weekly Security Update

The total number of reported incidents in Iraq for the period 10-16 December 2012 was 147. This is above the 2012 weekly average of 118 and is an increase on last week’s total of 134. The high number of national incident levels can be attributed to the significant increase in the North Central Region. With the exception of a minor increase in activity levels in the South Central Region, all other regions recorded lower figures than for the last reporting period. There was a much more consolidated insurgent effort to undermine security along the Tigris and Diyala River Valleys. 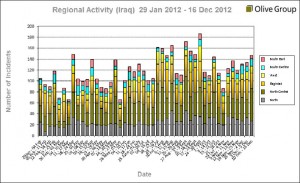