By Gary Sandiford on 16th January 2013 in Weekly Security Update

The total number of reported incidents in Iraq for the period 7 to 13 January 2013 was 142.  This is a reduction by more than 50 incidents from the exceptionally high figure recorded last week; however it remains significantly higher than the current twelve month weekly average of 123.  The South and South Central regions were subdued, relative both to the rest of the country and local trends.  Elsewhere, figures were roughly on par with the trends seen over the last twelve months, signalling a return to more normal levels of violent activity following a particularly busy three week period.  In addition to lower figures, the size and sophistication of most incidents was appreciably reduced this week, with relatively few successful high-profile or mass-casualty attacks occurring.  This lull may result from the depletion of resources following a particularly active period, though multiple factors are likely at play.  Diyala Province bucked the improved trend this week, with unusually high levels of insurgent and other violent activity continuing. 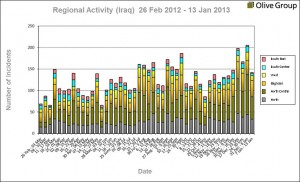