After the hiatus of last week Iraq has once again seen increased levels of violence, especially in Baghdad province and along the Tigris River valley, with the ISF and provincial politicians from both sides of the sectarian divide bearing the brunt of the violence.  In line with previous weeks reporting it is becoming increasingly clear that the Sunni insurgency  – especially ISI – are now more than capable of mounting sustained operations over and above that of previous years by deploying multiple high impact devices in concert nationwide.  With the looming provincial elections and continued political churn it should be expected that this attack tempo will continue as insurgents continually migrate across the national stage reinforcing and resupplying where necessary in order to maintain as much pressure as possible.   By close of play 02 April the approx. number of countrywide fatalities was at 105 with estimates of wounded at 370; bringing the total ISF and civilian fatalities this year to approx. 1018.

Similar security themes dominated national and international reporting with the PKK ceasefire, Syria and the provincial elections at the forefront of political dialogue this week. Ankara’s efforts to close with the PKK engineered ceasefire and troop withdrawal were dealt a blow this week as the PKK sought legal assurances from parliament that they would not be attacked by the military during their withdrawal from Turkish territory to their operating bases in the Qandil Mountains.  This step was seen as vital to taking the process forward, especially given the previous instances where PKK forces have been attacked during ceasefire withdrawals, most notably in 1999 after the arrest of Abdullah Ocalan.  Prime Minister Erdogan has sought to assuage PKK fears but has however stopped short of offering legal protection on the grounds that it is against current legislation.  Instead he continues to seek a situation whereby the PKK disarm prior to any move in order to mitigate against unnecessary skirmishing with the Turkish military, however this has yet to accepted by the PKK who fear the vulnerability and obvious consequences of being unarmed against an old foe. 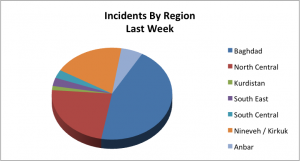 The provincial elections and associated violence reached new levels this week as candidates and officials continue to be subjected to an intensified campaign of violence and intimidation.  Numerous attacks were reported across the northern and central belts as the debate surrounding the demonstration movement and election impasse in Al-Anbar and Nineveh intensifies.  The protest movement this week announced they had formed an official delegation to negotiate terms with the GoI in a move widely seen as the movement distancing themselves from political blocs that had been negotiating on their behalf, but who had not managed to gain any purchase with Prime Minister Maliki.  How this dynamic unfolds remains to be seen however Baghdad will remain ever aware that the less influence they have in the western provinces the safer and more suitable the operating environment will become in favour of Sunni insurgent groups operating between the Syrian conflict and operations in Iraq.

In a departure from the norm of attacking Iraq’s energy infrastructure 01 April saw gunmen attack a Korean contracting company in the Akkas gas field, killing at least three local workers and kidnapping two more.  Whilst this event does not represent a clear intent to now continuously attack western interests  it does point towards a strengthening insurgent presence in the western desert regions.  The ISF confirmed this in a statement to Reuters stating that they see a renewed vigour in ISI units who have regained ground in the remote hills, caves and villages that straddle the Syrian border.