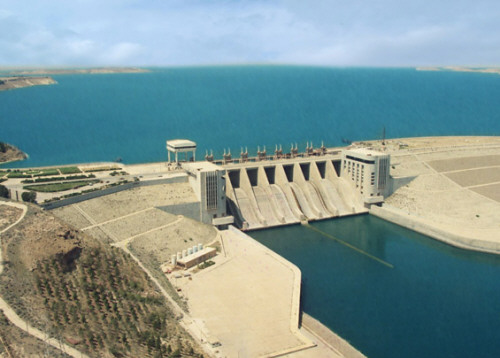 By Editor on 24th April 2013 in Construction & Engineering In Iraq, Security

AFP reports that Iraq has prepared contingency plans in case a dam on the Euphrates river in northern Syria collapses.

The 880-MW dam, in Raqa [Raqqah] province, fell under the control of Syrian rebels in February. It is known as the Al-Thawra [Tabqa] or "revolution" dam (pictured), and was build in 1973; it holds back Lake Assad, a 14.1 billion cubic metre man-made reservoir.

"We put plans in place to prevent the major damage that could be caused by such an incident ...

"We have to be ready for these kinds of incidents. When we saw what is happening in Syria, we put our plans in place."

The area surrounding the dam has largely been peaceful, and Hashem did not give specific details of the plans.

One Response to Iraqi Contingency Plans for Syrian Dam Collapse