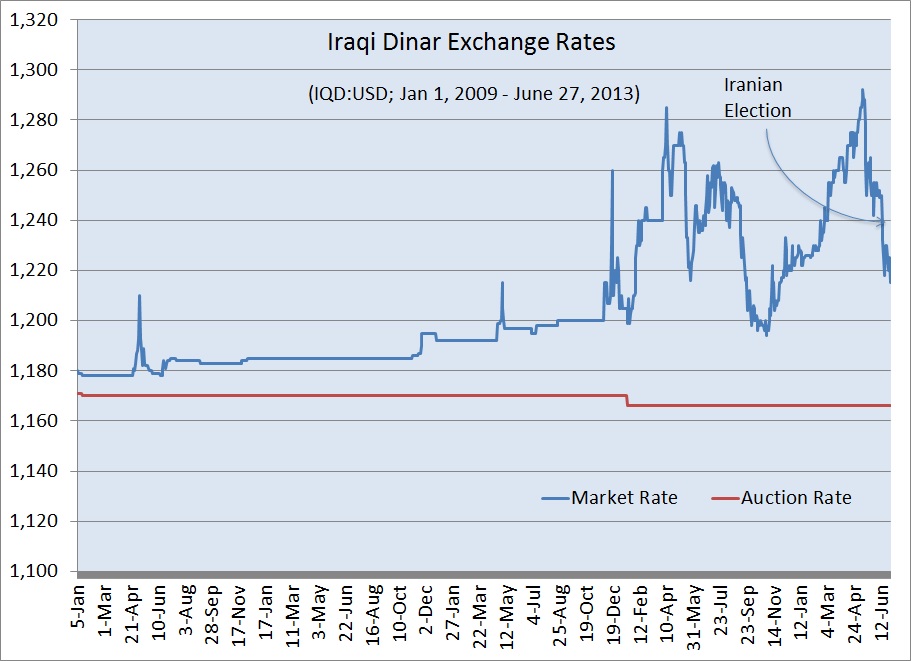 Since the beginning of 2012 the Iraqi dinar has been on something of a roller coaster ride. Changes in central bank policy combined with strong dollar demand from Iran and Syria have twice pushed the market rate above 1280. Both times, subsequent increases in dollar sales at the central bank’s currency auctions then steered the rate back toward 1200. (See chart. Data is from the Central Bank of Iraq website.)

In the most recent iteration of this cycle, the dinar appears to have gotten a boost from the Iranian election held on June 14. Hopes for an easing of US sanctions following the victory of moderate candidate Hassan Rouhani seem to have led to a significant drop in Iranian dollar demand both at home and abroad. The Iranian rial is reportedly up 20.7% post-election, rising from 36,200 to the dollar to 30,000. Iranians are now said to be selling down hoards of US dollar cash, the total value of which the Central Bank of Iran puts at USD 18 billion.

How long this trend can continue remains to be seen, however. President Obama earlier this month signed an executive order that will take effect July 1 and is intended to increase the pressure on the rial.