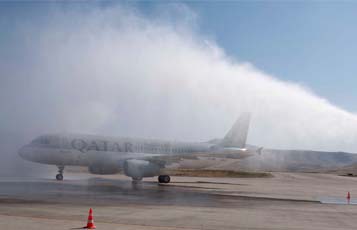 By Editor on 22nd August 2013 in Iraq Transportation News

Qatar Airways launched flights on Wednesday to its fifth destination in the Republic of Iraq, Sulaymaniyah, increasing the airline’s frequency across Iraq from 16 to 20 flights each week.

The new services, which will operate four-times-a-week non-stop from the airline’s Doha hub, brings the carrier’s global network to 129 destinations worldwide.

The Doha – Sulaymaniyah route is being operated by a state-of-the-art Airbus A320 featuring 144 seats in a two-class configuration of 12 seats in Business Class and 132 seats in Economy.

Selected aircraft feature seatback TV screens, providing passengers with the next generation interactive on board entertainment system, featuring a choice of more than 800 audio and video on-demand options, together with an SMS text messaging service from each seat.

The launch marks the rapid expansion by Qatar Airways in Iraq since the middle of 2012 when it began flights to Erbil, followed by the capital Baghdad, Najaf and Basra. Sulaymaniyah also marks the carrier’s fifth new Middle Eastern destination launched this year after Basra, Najaf, Gassim in the Kingdom of Saudi Arabia and Salalah in Oman.

The arrival of Qatar Airways’ flight QR438 was welcomed with a water salute at Sulaymaniyah International Airport and a warm reception presided by local officials. Fathi Al Shehab, Qatar Airways Senior Vice President GCC, Levant, Iran and Indian Subcontinent, led an official delegation on the flight from Doha and was welcomed at the airport by Director General Sulaymaniyah International Airport Eng.Tahir Qadir.