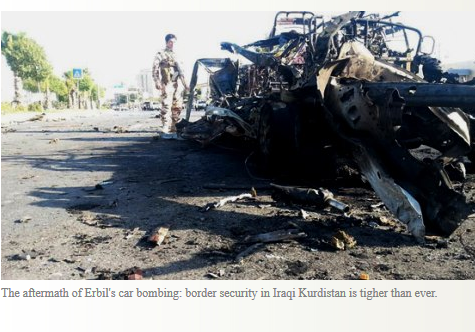 By Editor on 28th October 2013 in Politics, Security

Single? Arab? Male? Then Iraqi Kurdistan’s Borders are Closed to You

Almost a month after a terrorist attack on security forces in Erbil – the first in over six years – Iraqi Kurdistan is still feeling the effects. Border security has been tightened and Iraqi Arabs wanting to come in – whether for work or tourism – are being turned away. Single males are particularly unwanted.

One week after the attempted attack on Iraqi Kurdistan’s Asayish headquarters in the semi-autonomous region’s capital, Erbil, it was announced that all of the attackers were Arabs. Apparently no Kurdish individuals were involved. As a result of this, security on the borders of the region, which has its own parliament, military and legislation, was tightened.

The Sept. 29 attack was the first such attack to have succeeded – even partially –in over six years and resulted in the deaths of seven security staff and the six assailants, as well as wounding as many as 72 others. Masrour Barzani, who heads the Iraqi Kurdish Security Council, announced that the attackers and their accomplices were all Arabs who are thought to have made their way into the Iraqi Kurdistan via the nearby city of Mosul. An affiliate of Al Qaeda claimed responsibility for the attack; Mosul is considered by many to be the headquarters of the extremist Sunni Muslim group in Iraq.

Even before the announcement was made though, border security was being stepped up and Arabs coming into the region from Iraq were being subjected to special scrutiny. Many who had planned to come into Iraqi Kurdistan were denied entry and made to turn back.

One of these was Haider Qasim, 20, from the Diyala province. He and three friends wanted to holiday in the Iraqi Kurdish city of Sulaymaniyah. However border security turned them away, sending them home.

Qasim was angry and upset at his ruined holiday and felt that such behaviour would worsen the sometimes troubled but mostly positive relationship between Iraq’s Arabs and Kurds.

“Even if Arabs were behind this attack in Erbil, that doesn’t mean that all the Arabs of Iraq are terrorists,” Qasim argued. “If a Kurd does something wrong, we don’t blame every other Kurd for that deed.”

5 Responses to Single? Arab? Male? Then Kurdish Borders are Closed