Crucially, such a formal complaint now reportedly exists. It has been reported that an exiled Iraqi named Ayyad al-Bazi has submitted a complaint to the supreme court, precisely on the grounds that the new law is a mere proposal and therefore unconstitutional according to the court’s own jurisprudence.

Remarkably, at the same time, all major Iraqi parties insist they are looking ahead to elections in April next year. The State of Law bloc of Prime Minister Nuri al-Maliki has said it was against the removal of the “largest remainder” method for calculating seats, but did not press the issue. For their part, the optics of the rapidly changing drafts of the law proposal seem to tell a story about quite intense horse-trading behind the scenes.

First, of course, during the revision of the local election law in late 2012, it was thought the standard Sainte Lague method would offer the enhanced proportionality demanded by the supreme court after its review of the original election law from 2005. Then, in a draft for the changes to the general elections law published by Al-Mada in July, the D’Hondt proportional formula, which is slightly more beneficial to bigger parties, was used.

Finally, all of a sudden, a so-called modified version of Sainte Lague was inserted in the law passed last week. “Modified Sainte Lague “ is already in use in several democracies including Norway and Sweden, with the first divisor of the votes aggregated by each party seat at 1.4. This gives bigger parties more advantages than a pure St. Lague would give (as in the Iraqi local elections law).

Notice, though, that Iraq has created its own version of modified St. Lague, with the first divisor raised from 1.4 to 1.6, giving even more to the larger parties. (Also, unlike for example Norway, there are no longer any compensation seats at the national level in Iraq to reduce disproportionality.) This all smacks of a bazaar logic, and one cannot help wondering whether some of it represents a concession to Maliki, who was deeply unhappy with St. Lague in the local elections law. 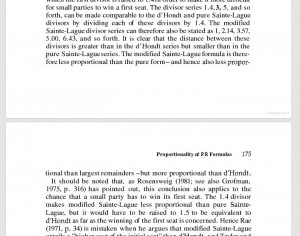 One must also wonder how the Iraqi communist party, who started the drive towards a more proportional system through a complaint to the supreme court, feels about all this. There has been much confusion about the new changes, with some alarmist reports out of the United States suggesting that the threshold for representation has gone up dramatically.

This is not the case: There is no longer any  “electoral divider” (qasim intikhabi) by which total votes are divided by seats available in each governorate to set an official cut-off point for representation. That was an aspect of the largest remainder method that no longer comes into play. However, simulations of the 2010 results strongly suggest that the communist party would remain unrepresented under the new system as well.

One Response to Uncertainty about Changes to Electoral System