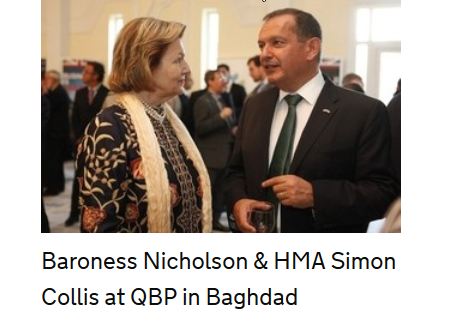 Baroness Emma Nicholson of Winterbourne has been appointed as the new Trade Envoy for the United Kingdom to Iraq.

Baroness Nicholson was personally appointed by the Prime Minister to act on behalf of the British Government to increase trade and economic co-operation between the United Kingdom and Iraq.

Speaking in Baghdad, the British Ambassador to Iraq, Simon Collis welcomed the appointment;

“I am delighted to hear that Baroness Nicholson has been appointed as the Prime Minister’s Trade Envoy to Iraq.

"The United Kingdom is committed to expanding its trade and economic relations with Iraq . Baroness Nicholson brings a wealth of experience of working in Iraq through her role as the Executive Chairman of the Iraq Britain Business Council. Her appointment as Trade Envoy represents a further strengthening of the commercial relationship between our two countries”.

“It is an honour and a privilege for me to accept this appointment from the Prime Minister. Iraq has a vibrant and booming economy, and is a huge supporter of British Industry and Commerce. We must ensure that the UK understands this and makes the best of the enormous opportunities Iraq offers us”