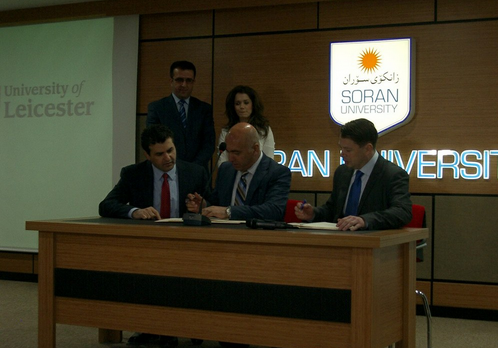 Leicester University from UK has launched a new Natural Resources Research Centre, bringing together researchers from Leicester and Soran University in the Kurdistan region of Iraq.

The new Centre, located in the Zagros Mountains – the largest mountain range in Iran and Iraq – will focus on research in the fields of sustainability, crop production and food security monitoring, geographic information systems and water resources, amongst others.

It was officially opened during a major signing ceremony on 11 February on the newly constructed campus of Soran University. Senior delegates from both universities joined with senior figures from the government of the Kurdistan Region to welcome this first major capacity building partnership between a UK and a Kurdish public sector university.

A split PhD scheme has also been agreed, in which students from Soran can spend one year of initial research training at Leicester and complete their PhD in Soran whilst being jointly supervised by members of staff from both organisations throughout the PhD.

The collaboration builds upon experience gained by the University of Leicester in recent years in capacity building collaborations with other Kurdistan Region universities, including a partnership which commenced in 2011 with University of Kurdistan Hawler to assist the latter to establish an English Language Teaching and Testing Centre in Erbil.

One Response to UK University Partnership with Soran University