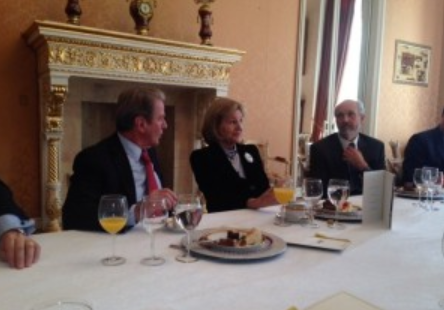 More than 30 senior representatives of some of France’s biggest businesses were in Paris on Fridayto hear the Executive Chairman of the Iraq Britain Business Council (IBBC) talk about the organisation’s work and ambitions for the future.

Baroness Nicholson was joined by the Council’s COO, Christophe Michels, at the event which was held in the Iraqi Embassy. The Ambassador, Fareed Yasseen and his UK counterpart, Faik Nerweyi, were also in attendance.

Businessmen and woman from companies such as Alstom, Total, Schneider, and the MEDEF listened to Baroness Nicholson speak about the huge opportunities on offer to enterprising firms willing to invest in Iraq.

The Baroness pointed out that the country’s economy was one of the most vibrant in the world, despite the current challenging situation in some regions. Growth was at nine per cent a year, and with the fourth-largest oil reserves in the world, the future was bright.

The Executive Chairman was delighted with the success of the event.

“For some time we have been keen to expand the IBBC’s portfolio. Our members already include almost all of the biggest firms in the UK that do business in Iraq. Following today’s event, we feel we have convinced many of France’s leading companies to follow suit.”

“We are hopeful that the likes of Alstom and Total will now look seriously to join our organisation. This can only make the IBBC stronger, and underline its position as the leading organisation for the region.”

Later, Mr Yaseem hosted an exclusive lunch at the Paris embassy, which was attended by the IBBC delegation, French business leaders, and the former French Minister of Foreign Affairs and founder of Doctors without Borders, Mr Bernard Kouchner.