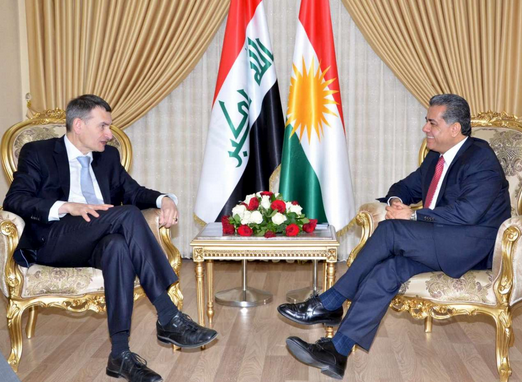 The Head of the KRG's Department of Foreign Relations, Minister Falah Mustafa, and Assistant Head of the DFR, Ms. Siham Jabali, met with the Director of the German Institute for International and Security Affairs (SWP), Dr. Volker Perth, to brief him on KRG foreign and domestic policy and the current political developments in Kurdistan, Iraq, and the Middle East generally.

Minister Mustafa welcomed Dr. Perth to Kurdistan and discussed the history and development of the KRG. He said, "In 1992 elections were held. There was no international recognition, but this first free and fair election was a milestone achievement for the people of this Region, and our progress today stems from such early, home-grown accomplishments." German Consul General Mr. Alfred Simms-Protz accompanied Dr. Perth in the meeting.

Minister Mustafa also discussed a variety of essential KRG policy matters, including the disputes with Baghdad, the unpredictable situation in Syria, the KRG relationship with Turkey and Iran, and the KRG relationship with Europe and the international community. The Minister emphasized the KRG's policy of dialogue and peaceful, constructive negotiations with the federal government, outlining the KRG's hope of resolution and progress in accordance with the constitution of Iraq.

Regarding the KRG role in the ongoing Syrian conflict and refugee crisis, Minister Mustafa said, "We remain concerned about the situation in Syria and we have urged and will continue to urge the Kurds of Syria to stand united." He added, "It is our national and moral obligation to help refugees wherever and whenever we can because not long ago, we too were refugees, scattered throughout the mountains of Turkey and Iran."

Minister Mustafa stated that the KRG has an open-door policy and enthusiastically welcomes mutually beneficial relationships with any nation willing to stretch out the hand of friendship. While pleased by the level of relations that the KRG enjoys with the German government, the Minister expressed the importance of a more consolidated relationship between the two governments and more high level visits between Erbil and Berlin.