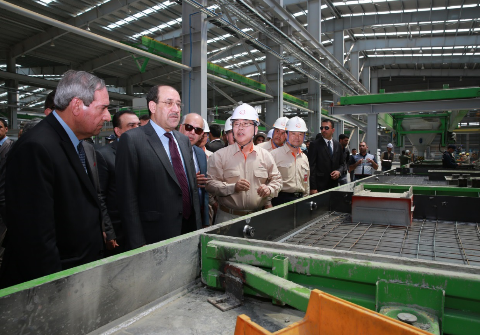 By Editor on 18th April 2014 in Construction & Engineering In Iraq

Speaking at the event, he said that “this project is our dream that has come true because it reflects our hope to provide housing units for all Iraqi people who were deprived of their right to live in decent housing units due to the wars, wrong policies and foolishness of the former regime”, stressing that the government intends to deliver housing units of this project for those affected by the terrorist attacks.

He added that “the ... suspicion of this project [has] come to an end. Now, the project is real, and we have to start to provide residential units. Our ambition is to proceed from the Bismayah Project by developing a plan to provide one million housing units and beyond, to three million housing units, either by convenient installments or distribution and building of residential land plots for those who do not have income”, stating that there are other similar housing projects in Basra and Karbala are being built.

The Prime Minister has appreciated Hanwha efforts, praising its seriousness and commitment to work and agreement. Also he extended congratulations to the people registered on the housing units.

Hanwha Precasts Concrete plant complex is built on the area of 660,000 m2. Including this plant, HANWHA E&C invested in 14 sub-plants of construction material production inside its base camp.