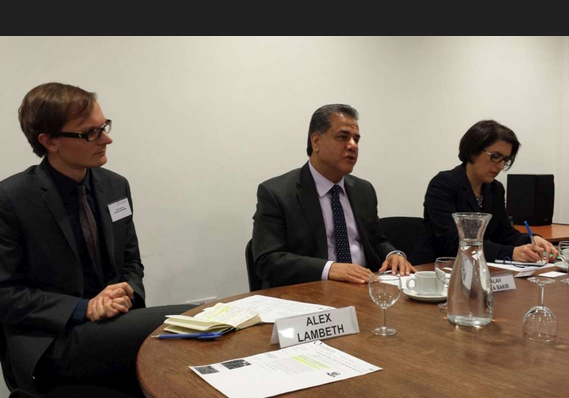 The Kurdistan Region is open for business and British companies are welcomed, Kurdish officials told members of British Expertise, a leading trade association at a seminar last week.

Minister Falah Mustafa, Head of the Kurdistan Regional Government's Department of Foreign Relations, and Bayan Sami Abdul Rahman, the KRG's High Representative to the UK, were joined by Alex Lambeth, Director of British Expertise, in highlighting the business opportunities and investor-friendly laws in the region.

The seminar was part of a series of meetings by Minister Mustafa who was in the UK on an official visit. The Minister was accompanied by Siham Mamand, the Assistant Head of the DFR, and High Representative Abdul Rahman during the visit which included meetings with British officials, parliamentarians, journalists and think tanks.

Minister Mustafa told the seminar at British Expertise, 'There is huge potential in many areas of the economy and we like to do business with the British. Foreign Secretary William Hague recognised this when he made the decision to increase the number of staff at the British Consulate in Erbil a few years ago while other British diplomatic missions were facing cuts.'

The minister outlined the key areas the KRG is promoting - tourism, agriculture and manufacturing - so that the economy is not over reliant on oil.

He also updated the meeting on political developments, relations with Turkey, the Syrian refugee crisis and the forthcoming Iraqi elections.

Ms Abdul Rahman spoke about the Kurdish economy's rapid growth over the past decade, which has been achieved thanks to high levels of security, clear economic policies that focus on services such as the provision of electricity, and the development of an oil and gas sector from scratch in the past seven years.

She urged Britain to make visas access easier for business visitors, to start direct flights and for British ministers to lead trade delegations to Kurdistan in the same way as other European countries do.

British Expertise members had a range of questions, including on Kurdistan's trade relations with Scotland and Northern Ireland, the KRG's procurement methods and the impact of Syrian refugees on the economy.